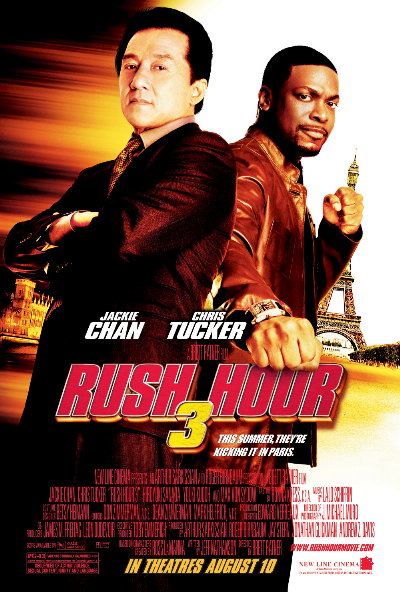 
"Rush Hour 3" is a 2007 martial arts/action-comedy , and the third installment in the "Rush Hour" starring and that began with the 1998 film "Rush Hour" and continued with the first "" in 2001. The film was officially announced on , , and filming began on , . The film is set in , Los Angeles, and . "Rush Hour 3" was released on , , in Canada, the US, and UK. [cite web |url=http://www.imdb.com/title/tt0293564/releaseinfo |title=Release dates for Rush Hour 3 (2007) |work=]
-winning co-stars as a French police official involved in (Chan and Tucker's characters) Lee and Carter's case. reprises his role as Ambassador Han, Lee's boss and friend who appeared in the first installment. This film has received a M rating by the and a PG-13 rating by the MPAA for "sequences of action violence, sexual content, nudity and language".

The film was not screened in Chinese theaters in 2007 due to an "overabundance" of imported films released that year, an import official stated (China only allows 20 imported films to be released nationwide in theaters each year).

Three years after the events of "", James Carter is no longer a , but a traffic cop on the streets of Los Angeles. Lee is now the bodyguard for his friend Ambassador (formerly Consul) Han. Lee and Carter are no longer on speaking terms after an incident in when Carter accidentally &mdash; but "not" fatally &mdash; shot Lee's now ex-girlfriend in the neck, Secret Service agent Isabella Molina ().

During discussions in the World Criminal Court, as the Ambassador addresses the importance of fighting the Triad organization, he announces that he may know the whereabouts of Shy Shen. Suddenly, Han takes a bullet in the shoulder, disrupting the conference. Lee pursues the and corners him, discovering that the assassin is his 'brother' Kenji. When Lee hesitates to shoot Kenji, Carter, having heard of Han's incident on the police radio, shows up driving towards the two and accidentally nearly runs Lee over, allowing Kenji to escape.

In the hospital, Lee learns that Han will make a full recovery. Han's daughter, Soo-Yung (), now grown up, arrives and makes Lee and Carter promise to capture the one behind the shooting. She then informs Lee and Carter that her father gave her an envelope which contains important information regarding the Triad, and that the envelope is in her locker at the studio where she works. Lee and Carter make their way to the martial arts studio, but find out that a gang of armed men have already arrived and emptied it. Lee and Carter are told by the Master of the studio that Soo-Yung and Han are in danger, and rush back to the hospital.

Once the two reach the hospital, a gang of assassins arrive to kill Soo-Yung and Han. Lee and Carter manage to defeat them, with the help of Soo-Yung, and interrogate the leader of the assassins. Much to Lee and Carter's surprise, the Asian assassin only speaks French. With the help of a resident nun, Sister Agnes (), who translates, they find out that they are marked for death by the Triad along with Soo-Yung and Han. For her protection, they take her to the French Embassy and leave her under the care of Reynard, the French ambassador. When a car bomb detonates, nearly killing Reynard and Soo-Yung, Lee and Carter decide to go to Paris to investigate.

In Paris, (after getting a painful from a Parisian commissioner, played by ) Lee and Carter meet up with George, a taxi driver. George refuses to drive Carter, saying that Americans make him sick, as they are "the most violent people on Earth"—to which Carter replies by forcing George, at gunpoint, to drive to a Triad hideout disguised as a gentleman's club. There Lee fights off a Triad assassin named Jasmine (); meanwhile, Carter meets a beautiful woman whose name is not disclosed (). However, Lee and Carter are both forced out of the club and are captured by the Triads. Lee and Carter manage to escape, but then have a falling out concerning Lee's relationship with Kenji. Shortly after Carter leaves, Reynard appears. Lee asks who Shy Shen is, but Reynard tells him that Shy Shen is not a man, but a list of the Triad leaders. Reynard reveals that Han's informant knows where Shy Shen is. The informant turns out to be Geneviève, the woman Carter met at the gentlemen's club and both Lee and Carter end up looking for her.

After the two have encountered Geneviève, they save her from an assassination attempt by the Triads and flee to their hotel room. However, they are attacked again by Jasmine and decide to hide out with George, who now has fostered a great appreciation for the United States. Lee and Carter learn that Geneviève not only knows where the list is, but that she "is" the list. The names of the thirteen Triad leaders have been tattooed on the back of her head, as per tradition, and Geneviève explains that she will be decapitated and buried if the Triads capture her. When Lee and Carter bring Geneviève to Reynard, he asks Geneviève to show him the list. Lee points out that they never told him that she had the list imprinted on her head. Reynard then reveals that he has been working with the Triads all along. Kenji calls and informs Lee that he has captured Soo-Yung and that he would like to exchange her for Geneviève.

Lee arrives at the exchange point, the Jules Verne Restaurant in the , with Carter, disguised as Geneviève. Kenji challenges Lee to a sword fight, during which the two fall off the tower and get caught in a safety net. Lee's sword cuts the safety net open and it collapses, leaving both men hanging on for dear life. Lee then grabs Kenji's arm, intending to save his life, but placing his own at risk. Kenji willingly lets go of Lee and falls to his death, saving Lee's life. Meanwhile, Carter single-handedly defeats the rest of the Triad henchmen, celebrating by dancing to the beat of ' . He then goes to save Soo-Yung. Jasmine arrives and attempts to kill Soo-Yung and Carter by unlatching the rope Soo-Yung is tied to. Carter grabs the rope before it can fall and accidentally kicks Jasmine into one of the rotating cranks, which crushes and kills her.

As Carter and Lee send Soo-Yung down the elevator, more Triads arrive. In order to escape, Lee and Carter use a French flag as a makeshift parachute and float to safety. Unfortunately, they are confronted by Reynard, who is holding Geneviève hostage and threatening to kill her and frame Lee and Carter for her murder. However, George, having followed Lee and Carter, manages to shoot Reynard and declares "Case Closed". The police suddenly arrive, with the commissioner from earlier gloating and trying to get undeserved credit. After giving the commissioner a team punch to the face, Lee and Carter leave the scene dancing to "War".

The film received mainly negative to mixed reviews from critics. As of , , the film had earned a "44" at , indicating "mixed or average reviews". [ [http://www.metacritic.com/film/titles/rushhour3 "Rush Hour 3" at Metacritic] ] On the film had a score of 20% based on 147 reviews (29 fresh, 118 rotten). Christopher Tookey of said "Infecting this third movie is an extra, deeply unpleasant level of racism that we haven't seen before in the series."

Because of the film's box-office success, director Brett Ratner and writer Jeff Nathanson are currently considering the production of a fourth installment. In the DVD for "Rush Hour 3", Brett Ratner jokes that the fourth "Rush Hour" film could be released in either or . Ratner and Nathanson are exploring many concepts, including the use of the technique for the possible sequel and various different film projects with Chan and Tucker. It has been reported that the fourth film may be set in . [ [http://www.worstpreviews.com/headline.php?id=5191 'Rush Hour 4' is Set in Moscow] ]

The film was released on , , [The DVD release date of "Rush Hour 3" varies, as it was seen in stores on , , while in advertisements for other stores it was not scheduled for release until .] on DVD and Blu-ray disc. As of , , the film has made $80.75 million in Home Video rentals, making it the top rental of 2007. [ [http://www.endofboredom.com/content/box-office-underperformer-rush-hour-3-top-dvd-rental-2007 Box Office Underperformer "Rush Hour 3" Is Top DVD Rental of 2007 | Endofboredom.com ] ]