Delacroix is a station on lines 2 and 6 of the Brussels metro. It runs parallel to Delacroix street, located in the municipality of Anderlecht. The Brussels-Charleroi Canal runs under the station.

The station was opened on 4 September 2006 as southern terminus of line 2. In 2009 the loop of line 2 was closed with the junction between Delacroix and West station.

The station is named for Léon Delacroix, a former Belgian prime minister. 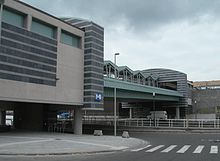 Elevated station over the canal with entrances at ground level