Diplomatic Protection Group
"SO16" redirects here. For information on postcodes beginning with SO16, see SO postcode area. 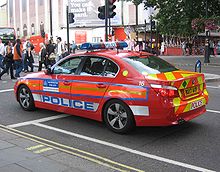 Uniquely in the Metropolitan Police, DPG vehicles are red[citation needed].

The Diplomatic Protection Group (DPG) is a Specialist Operations branch of London's Metropolitan Police Service.[1] The unit's main purpose is to provide specialist protection for diplomatic residencies in London, such as embassies, high commissions and consular sections.[1] The group also provides protection and support to members of the Diplomatic Community, as well as members of HM Government.[1] As of 2008, it is headed by Chief Superintendent Christine Jones.

The Diplomatic Protection Group was formed in the mid-1970s and its purpose was to establish a stand-alone Police Group with primary responsibility for all Diplomatic Premises within Central London and provide peripheral protection to Royalty, Royal Palaces and senior Government figures (at State and Diplomatic Functions, State Visits etc.). The first DPG base opened in Kensington, the second, two months later in Chelsea and a third, a further two months later in Central London (Beak Street). The Group had no connection with local Police Divisions and was a Branch of Scotland Yard titled, 'Royalty and Diplomatic Protection Department' (RDPD). The Group was manned by volunteer uniformed Police Officers drawn from all Divisions of the Metropolitan Police, but there were some 'pressed men'. These 'pressed men' represented those police officers who had provided the diplomatic protection prior to the formation of the Group. Believing they had at last, escaped these unpopular protection duties, they were not too happy to find they had been 'pressed' (transferred) from their 'home' Divisions into the RDPD. Not all volunteer RDPD officers, at this time, were required to be Authorised Shots (Authorised Firearms Officer).

The Diplomatic Protection Group are responsible for providing static security on sensitive premises, such as foreign embassies, high commissions, and other diplomatic premises. The DPG is also responsible for security at 10 Downing Street, New Scotland Yard, and certain private residencies of diplomats, politicians, and some senior military staff. They also have a responsibility of providing static guards to hospitals, if a person is deemed to be under threat, along with the guarding of some high risk prisoners. Over the last few years the command has diversified its responsibilities to provide VPOs (Venue Protection Officers) who are trained in Close Protection techniques and must undergo selection and 3 weeks additional training with both CO19 and SO1 Specialist Protection Command. These Officers bolster existing close protection team numbers for VIP's and diginitaries and the places they visit. In addition to these responsibilities, SO6 also have a Sniper team who must pass selections with both SO6 and CO19 separately before attending and passing the 6 week full National Sniper course to earn the right to wear the 'Crossed Rifles' emblem[citation needed]. They provide support to MPS wide deployments, CO19 requests, and ceremonial events. The Command also has a dedicated counter-reconnaissance team whose work is understandably secretive as it has close ties to the security services. Selection to this unit is tough, as is the SCD11 Advanced level Surveillance course that must be passed to join. On any given operational day, the Command will deploy several ARV's (Armed Response Vehicles) as well as multiple armed response BMW K1200RT(P) motorcycles and armed proactive patrol vehicles in support of both static Officers and calls of assistance from the diplomatic community.

As of 2003[update], the DPG is known to operate 40 fixed posts and guard 160 diplomatic missions. It is also the biggest specialised armed unit within the United Kingdom, with eight hundred police officers.

Due to many of the premises the DPG guard being classed as "high risk" status, officers operationally deployed are routinely armed. The DPG also assist the Firearms Unit, when additional support is needed.

The DPG is negatively known amongst some circles as 'Doors, Posts and Gates' on account of their static site duties. This is however a rapidly evolving command and is moving more towards proactive counter terrorist policing activities.

When the Diplomatic Protection Group was formed it was a branch of a division which policed Westminster, due to most diplomatic premises being within the area. The DPG was created, mainly to replace the Special Patrol Groups duties, which included the protection of premises. 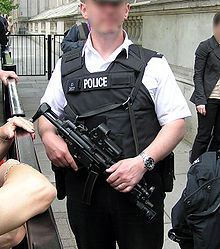 A police officer guards the entrance to Downing Street, London, home of the Prime Minister and Chancellor of the Exchequer

During the Iranian Embassy Siege in 1980, Police Constable Trevor Lock was on protection duty. He was taken hostage, along with the embassy staff, and managed to conceal his firearm until the assault by the British Army's Special Air Service, when he then restrained the terrorist leader.

Other incidents where DPG officers have used firearms, include: when PC Peter Slimon GM visited a bank to draw money out while on his lunch break, he found that a bank robbery was in progress, and fatally wounded one, and injured two robbers. In the same incident,PS Stephen Peet responded, and shot the third robber. PC Gordon McKinnon was authorised to free a hostage in Trafalgar Square, and did so. More recently the Hackney siege and Markham Square incidents have involved SO6 Officers.

All DPG officers actively guarding premises are armed, making each and every one an Authorised Firearms Officer. In cases where the Specialist Firearms Command requests additional armed support, available DPG officers supplement the firearms unit.