Marie Löhr was born in Sydney to Lewis J. Löhr, treasurer of the Melbourne opera house, and his wife, the English actress Kate Bishop (1848–1923). Her maternal uncle, Alfred Bishop, along with her godparents, William and Madge Kendal, were also actors.

Her first stage appearance was in Sydney, aged 4, in The World Against Her. Her London debut (after the family's move to England), aged 11, in Shockheaded Peter and The Man Who Stole the Castle. Her later stage-work included appearances in a 1929 London stage production of Beau Geste alongside Laurence Olivier, husband of Vivien Leigh, and in the original production of the 1930 play The Bread-Winner.

Her first film appearance was in the 1932 film version of Aren't we All?, and — having appeared in several of George Bernard Shaw's works onstage - her subsequent films included two Shaw adaptations. She died at the age of 84, and was buried in the Brompton cemetery in west London. 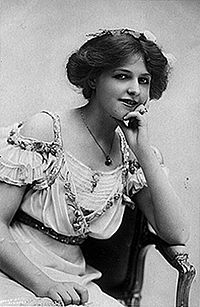