The plot concerns railroading on the Chicago, Milwaukee, St. Paul and Pacific Railroad, and the movie was largely filmed along that railroad's lines in Montana. The railway yard in Miles City, Montana was a primary setting, while rural scenes were shot along the railway line through Sixteen Mile Canyon, Montana. Additional footage was shot in Chicago, Illinois.

Louis Wolheim plays the boss of the railroad yard in Miles City, Montana. The film opens with a landslide across the tracks in Montana, and a repair crew is dispatched to clear the tracks. Several hobos are lounging nearby and are put to work helping the repair crew. One of the hobos, played by Robert Armstrong, is discovered to have been a former railroad engineer who lost his job due to insubordination. He is given a new job for the railroad by the yard boss, but quickly falls in love with the boss's fiancée, played by Jean Arthur.

Jealousy grows between the two over the affections of Arthur with both of them attempting to win her in marriage. Things come to a head during a fight in the railroad yard between the two, during which Wolheim is hit by a train and injured. To save his life, Armstrong must transport him in record time to Chicago for surgery. 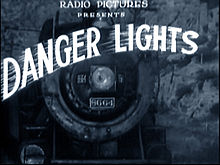 Screenshot from the film.

Danger Lights was filmed during a period when some movie studios were experimenting with various widescreen film formats. As part of this trend, two versions of the film were created. One used standard 35mm film and Academy ratio, the other used an experimental 65mm widescreen format at a 2:1 aspect ratio. This latter process was called "Natural Vision" and was invented by film pioneers George Kirke Spoor and P. John Berggren. The Natural Vision print of the film was reportedly screened at only two theaters, and no copies of it are known to exist today.

Danger Lights features rare footage of a tug of war between two steam locomotives, actual documentary footage of the activities in the Miles City yard, and what is believed to be the only motion picture footage of a dynamometer car from the steam railroad era. Similar footage 'may' have existed in MGM's Thunder(1929), with Lon Chaney but that film is now lost.

The portion of the film that was filmed in Montana was part of the electrified Rocky Mountain Division of the railroad, with the 3000 volt direct current trolley and the 100,000 volt alternating current "highline" plainly visible in several shots. Despite the fact that the railroad often touted the power and reliability of its straight electric locomotives, none are seen in the film.

The movie is in the public domain and is available for MPEG streaming or download (in the shortened version) at the Internet Archive.