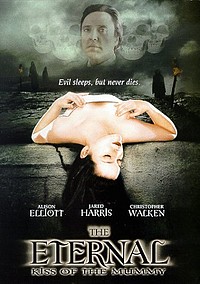 "Trance" is a 1998 . Trance is a remake for the 1932 film "The Mummy". It directed and written by . Film also known as "The Eternal: Kiss of the Mummy". It premiered on Toronto Film Festival, but actually film released as in , and many parts of the world including , , , , etc.

Nora (Elliott) is a a young American woman of Irish origin who, well, lives up the stereotype of her people and is a bit of a lush. She and her equally inebriated husband Jeff are coming home from their latest drunken binge one night when Nora takes a tumble down the stairs of their New York apartment building. Nora survives the fall, but is soon visited by headaches, nosebleeds and hallucinations for her trouble.

Determined to dry out for the sake of their young son, the couple head to Ireland where they pay a visit her grandmother and Uncle Bill Ferriter in their huge, labrynthinian mansion. Uncle Bill harbors a dark and fascinating secret in the basement: the perfectly preserved, mummified remains of a Druid witch; one of those fascinating "bog-men". Only this one is considerably livelier than your average bog-person and, as it happens, turns out to be a distant ancestor of Nora's.

Poor old Uncle Bill quietly explains to her that the druid witch was neither good not evil in her life, but more like a force of nature. But he and we learn different when the mummy gets her groove on and sets out to steal the body, soul and identity of her hapless descendant.

*It is the first and final film where Rachel O'Rourke starred in.
*It is one of the last films of -nominated actor .
*Trance is the film debut of the musician Mark Geary. Film also features actors from his family: Karl Geary and David Geary.
*A character from this film quotes the opening narration from the tv show named "The Six Million Dollar Man" (1974).

"Trance" received mixed reviews from critics. Film review aggregate website Rotten Tomatoes gave the film a "rotten" score of 33% based on 10 reviews [ [http://www.rottentomatoes.com/m/1085690-eternal/ The Eternal Movie Reviews, Pictures - Rotten Tomatoes ] ] . For David Nusair (from "Reel Film Reviews") film is "just silly and not the least bit scary". Mark R. Leeper said for film "This is the kind of film you used to see in the 60s from small studios like Tigon" and also he said "Once it gets going it is entertaining but it would be hard to claim it is actually a good film." [ [http://www.imdb.com/Reviews/147/14790 Review for Trance (1998) ] ]

*Revealing mistakes: When the girl cuts her throat near the end, the wound is clearly already there before she slices it. Additionally, she does not slice it directly where the wound is.