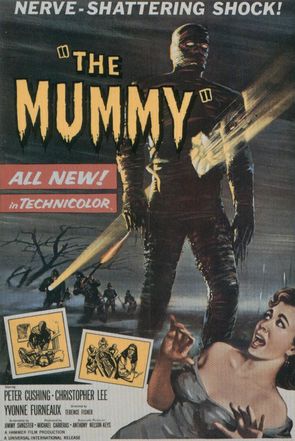 Though the title suggests Universal Pictures' 1932 film of the same name, the film actually derives its plot and characters entirely from two Universal later films, "" and "". It is one of a few Hammer remakes of Universal films.

In in 1895, a team of archaeologists, including John Banning (), his father Stephen Banning () and his uncle Joseph Whemple, are searching for the tomb of Ananka, the of . John is held up by an injured leg while his father and uncle open the tomb. Before they enter, an ian man named Mehemet Bey () appears and warns them not to go in, lest they face dire consequences. Stephen and Joseph ignore him, and within find the of Ananka. When Joseph leaves to tell John the good news, Stephen finds the mythical Scroll of Life and reads from it. He then sees something that drives him into a state. John and Joseph continue excavating the tomb but cannot find the Scroll of Life, little suspecting it is now in the hands of Mehemet Bey.

Three years later in , in 1898, Stephen Banning comes out of his catatonic state at the Engerfield Nursing Home for the Mentally Disordered, and sends for his son. He tells him that when he read from the Scroll of Life, he accidentally brought to life , the of Karnak and the eternal guardian of Princess Ananka's tomb, who was sentenced to eternal living death as punishment for his forbidden love for the princess. Now, Stephen says, Kharis will hunt down and kill all those who desecrated Ananka's tomb. John does not believe his father.

Meanwhile, Mehemet Bey, revealed as a devoted worshipper of Karnak, has come to Engerfield under the alias of Mehemet Akir to track down the Bannings. He hires a pair of drunken carters, Pat and Mike, to bring the slumbering Kharis in a crate to his rented home, but the two men foul up and Kharis' crate ends up falling into a pond. However using the Scroll of Life, Bey exhorts Kharis to break free of the crate and rise from the water, then sends him to Stephen Banning at the Engerfield Nursing Home. Soon after, Kharis is also sent to murder Joseph Whemple, doing so right before the eyes of John Banning, who shoots Kharis twice at close range with a to no effect.

Mulrooney is sent from to solve the murders, but because he is skeptical and deals only in "cold, hard facts," he refuses to believe John's wild story about a killer , even when John figures out that he is to be Kharis' third and final victim. While Mulrooney attempts to build his investigation by interviewing people who have seen Kharis, including the two carters, John notices that his wife, Isobel Banning, bears an uncanny resemblance to Princess Ananka. Mulrooney meanwhile slowly begins to come to the conclusion that John is right, and that there is indeed a mummy in Engerfield. Together he and John try to figure out who is controlling Kharis.

Mehemet Bey sends the dreaded mummy to the Bannings' home to slay his final victim. However, upon seeing Isobel, Kharis stops his attack on John and leaves. Bey mistakenly believes that Kharis has slain John, and is surprised when John turns up alive at his house, suspecting him of being the one controlling the mummy. After John leaves, Bey sends Kharis to make a second attempt on John's life, only this time John has Mulrooney as his , and Kharis seems more interested in pursuing Isobel than he does following Bey's murderous orders...