"Raging Abe Simpson and His Grumbling Grandson in "The Curse of the Flying Hellfish"" is the twenty-second episode of The Simpsons' seventh season. It originally aired on the Fox network in the United States on April 28, 1996.

In the episode, one of Abraham "Grampa" Simpson's fellow World War II veterans, Asa Phelps, dies, leaving him and Mr. Burns as the only living members of Grampa's war squad, the Flying Hellfish. In the final days of the war, the unit had discovered several paintings and agreed on a tontine, placing the paintings in a crate, and the final surviving member would inherit the paintings. As Mr. Burns wants the paintings as soon as possible, he orders Grampa's assassination. To escape death, Grampa moves into the Simpsons' house, where the family lets him live in Bart's room. Bart eventually joins Grampa in a daring mission to recover the paintings.

The episode was written by Jonathan Collier and directed by Jeffrey Lynch. It was inspired by several stories about lost art surfacing. The animation of the episode has been praised for its action and underwater scenes. The staging in several scenes was based on DC Comics's Sgt. Rock. It acquired a Nielsen rating of 8.3, and was the second highest-rated show on the Fox network the week it aired.

The relationship between Grampa and Bart deteriorates after Grampa's senility and abrasiveness embarrass Bart during Grandparents Day at Springfield Elementary School, where Grampa claims to have invented the toilet, to have turned cats and dogs against one another, and that Kaiser Wilhelm II stole the word "twenty".

Back at the retirement home, Grampa receives word that Asa Phelps, one of the men who served under his command in the Army as part of the "Flying Hellfish" unit during World War II, has died. Other members of the Flying Hellfish included Chief Wiggum's father Iggy, Seymour Skinner's father Sheldon, Griff McDonald, Milton "Ox" Newman-Haas, Etch Westgrin and Barney Gumble's father Arnie (it is also mentioned that their field commander was a Flanders, though as his father is portrayed as beatnik in other episodes, this is perhaps Ned's grand-father or Uncle). Grampa and Mr. Burns are now the only two surviving members of their squad. Burns wants what he describes as the "Hellfish Bonanza" for himself; not wanting to wait for Grampa's natural death, he hires Fernando Vidal, "the world's most devious assassin," to kill him. Vidal tries several tricks (including disguising himself as Homer, with Burns as Marge and Smithers as Bart), and as a last resort storms Grampa's retirement home with a machine gun. Grampa evades the initial volleys by sheer luck and escapes when the attending nurse produces a shotgun and routs the surprised assassin. Fearing that Burns will not give up, Grampa takes shelter with the Simpsons. He moves into Bart's room, putting further strain on their relationship, and reveals to Bart the reason Burns wants him dead.

In a flashback, it is revealed that during the final days of World War II, the Flying Hellfish discovered several priceless paintings in a German castle. To avoid being caught for theft, the soldiers set up a tontine and locked the paintings in a strongbox to be hidden away; the one who outlived all the others would then inherit the collection. Each man was given a key, all of which would eventually be needed to trigger a mechanism that would reveal where the paintings were hidden.

After Grampa finishes his story, Bart dismisses it as fiction but is proven wrong when Burns suddenly breaks in to his room and tries to take Grampa's key by force. However, Bart manages to steal both keys back and the two Simpsons go after the paintings. They hurry to the local cemetery, where a monument to the Hellfish is located. After activating the locator mechanism built into the monument, they discover that the paintings have been hidden at the bottom of a lake, so they steal a motorboat from Ned Flanders and head out onto the water. Bart brings up the strongbox, but just as he and Grampa open it, Burns shows up to take the paintings at gunpoint. When Bart calls him a coward and an embarrassment to the Hellfish, Burns kicks him into the empty strongbox, which topples back into the lake. Grampa dives in to save Bart, and the two chase Burns back to shore; Grampa then overpowers Burns, gives him a dishonorable discharge for trying to kill his commanding officer, and expels him from the tontine.

Before Grampa and Bart can go home with the paintings, representatives of the U.S. Department of State arrive on the scene. The government has been trying for 50 years to track down the paintings. Rather than arresting Grampa and Bart for the theft, the representatives instead turn over the paintings to an heir of one of the original owners in order to avoid an international incident, and Bart and Grampa are left empty-handed as the heir leaves for a Kraftwerk concert in Stuttgart. Grampa tells Bart that he did all of this to show that he used to be something besides a pathetic old man, and Bart says that he never thought of Grampa that way. The two hug, their relationship back on good terms. 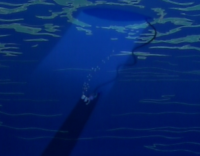 The episode was praised for its animation, especially in the underwater scenes. The distorted underwater effect was added in post-production.[3]

Jonathan Collier, who wrote the episode, got the idea after reading several then-current stories about lost art surfacing.[4] The story then evolved into one involving Grampa and Burns, and it gave the writers a chance to introduce the relatives of some of the recurring characters.[4] The other members of the Flying Hellfish were based on stereotypical war movie characters.[5] The idea of having a tontine came from Bill Oakley, who got the idea from "an old Barney Miller episode".[5] Collier originally named the unit the "fighting hellfish" but it was later changed to the "flying hellfish".[4] The logo for the unit was designed for the original name and was not changed when the name was switched.[6]

Supervising director David Silverman describes the directing in the episode as an "amazingly brilliant job". Director Jeffrey Lynch received help from Brad Bird, with whom he worked on many complex staging shots. Lynch did not have any other episodes to work on at the time and was able to devote a lot of time to working on the episode. He storyboarded most of it by himself.[6] The episode contains more effects shots than an average episode of The Simpsons, many of which were worked on by animator Dexter Reed. Other animators that worked on the episode include Chris Clements, Ely Lester, James Purdum, Tommy Tejeda and Orlando Baeza.[6] 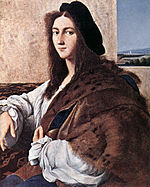 Portrait of a Young Man by Raphael, one of the lost works of art depicted in the episode

Much of the staging in the flashback scenes is based on DC Comics's Sgt. Rock and Will Eisner's The Spirit as well as Marvel's "Sgt. Fury and his Howling Commandos.[3] Many of the paintings in the episode are based on real paintings that went missing during World War II. The animators referenced a book of lost art for the designs.[6] Other cultural references in the episode include Grampa's recollection of his brush with death at the Retirement Castle, which is a reference to Dorothy's return to Kansas in The Wizard of Oz.[5] The scene where Grampa tries to assassinate Hitler is based on The Day of the Jackal.[3]

In its original American broadcast, "Raging Abe Simpson and his Grumbling Grandson in "The Curse of the Flying Hellfish" finished 48th in the ratings for the week of April 22 to April 28, 1996, with a Nielsen rating of 8.3.[7] The episode was the second highest-rated show on the Fox network that week, following The X-Files.[7]

The authors of the book I Can't Believe It's a Bigger and Better Updated Unofficial Simpsons Guide, Warren Martyn and Adrian Wood, wrote that the episode is "notable for Mr Burns' impersonation of Marge, some spectacular action sequences, and some good underwater scenes - but [it is] not especially brilliant".[2]

Dave Foster of DVD Times said: "It's easily the highlight of this season in terms of cinematic presence, with wonderful animation, staging and lighting which complements what is essentially a mini action adventure movie superbly realised via Grandpa and Bart. Like numerous episodes this season it also works as another example of family ties being reinforced though never at the sake of entertainment."[8] DVD Movie Guide's Colin Jacobson wrote that "many Grampa episodes tank, but “Hellfish” provides a very notable exception. It’s a lot of fun to see his wartime past, especially since we find precursors of series regulars. I also like the action swing the story takes, as it becomes clever and inventive. This comes out as a terrific show."[9] Adam Finley of TV Squad listed "Raging Abe" as one of the most touching episodes of The Simpsons, noting that it is "more "crazy action flick" than emotional, but I list it here because it shows Grandpa Simpson as someone other than a crazy old coot."[10]