Earth vs. the Flying Saucers

Earth vs. the Flying Saucers 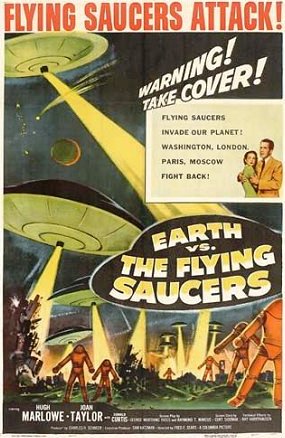 "Earth vs. the Flying Saucers" is an American film, directed by and was released in 1956. The film is also known [ http://www.imdb.com/title/tt0049169/ ] as "Invasion of the Flying Saucers". It was ostensibly suggested by the non-fiction work "" by . The groundbreaking effects were created by .

The film is set in 1956, a year before the first satellite, went into orbit. In the film, "Project Skyhook," a U.S. effort to launch a dozen satellites, is visited by a flying saucer. A misunderstanding leads to the aliens being fired on, and they retaliate by destroying the project site, killing everyone except the two principal scientists, Dr. and Mrs. Marvin (a married couple). The sequence of events quickly spirals out of control and leads to a full scale invasion. Flying saucers attack , , and . In the end, the alien saucers are defeated over the skies of Washington by a device using high-power sound coupled with an electric field that stops the saucers' propulsion systems.

animated the saucers in this movie. That may be considered easier than animating dolls for the usual monsters, but he also animated all the stones of the buildings they crashed into in this picture so that the action would appear realistic. Some figure animation was used to show the aliens emerging from the saucers. A considerable amount of was also used, notably scenes during the invasion which showed batteries of US s and an early rocket launch, presumably standing in for the recently introduced missile.

The voice of the aliens was produced from a recording of reading the lines by jiggling the speed control of a reel-to-reel tape recorder so that it continually wavered from a slow bass voice to one high and fast.

During a question and answer period at a tribute to Harryhausen and a screening of in , , Harryhausen said he sought advice from on the depiction of the flying saucers in the film, but felt that Adamski grew increasingly paranoid as time went on.

Connections to other films

Several plot points are shared with 's 1953 filmed version of "The War of the Worlds":

* The aliens kill a relative of one of the main characters.
* The aliens go out of their way to use their ray on a wooden water tank atop a building.
* The defeat of the aliens is shown by having their vehicles crash into buildings (in this film's case, the Washington Monument and the Capitol Building).
* The aliens required apparatus to see (and hear) adequately; this was acquired by the scientists, who tested it and noted that the aliens were sensorially degenerate.

The film also has several connections with 's influential 1951 film "The Day the Earth Stood Still":

* In both films, the initial encounter between the alien(s) and humans ends in violence through a misunderstanding.
* Both films involve alien spacecraft visiting , a situation that has since become a science fiction (exploited notably in the 1996 film "Independence Day").
* Actor appears in both films, and in both films his character at one point decides on a course of action that his tries strenuously but unsuccessfully to dissuade him from taking.
* "Earth vs. the Flying Saucers" even uses some stock footage from "The Day the Earth Stood Still". The borrowed footage portrays the public apprehension and disruption caused by the alien(s) all over the world; in the British segment, the same actor can be seen mouthing the words "It's that spaceman—that's what it is!" although, of course, his voice is only "heard" in "The Day the Earth Stood Still".

's 1996 film "" consciously spoofs several aspects of this film, especially in the design of its flying saucers.

The film has shots of several 1950s technologies in action, including communications, a and a .