Coulter Principle. The transient current drop is proportional to the particle volume. 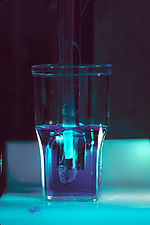 The tip of the Coulter counter in a buffer solution, counting cells in solution.

A Coulter counter [1] [2] is an apparatus for counting and sizing particles suspended in electrolytes. It is used for cells, bacteria, prokaryotic cells and virus particles[3].

An American inventor named Wallace H. Coulter was responsible for the theory and design of the Coulter Counter. He first devised the theory behind its operation in 1947 while experimenting with electronics. Coulter determined that electrical charge could be used to determine the size and number of microscopic particles in a solution. This phenomenon is now known as the Coulter Principle.

The Coulter Counter is a vital constituent of today's hospital laboratory. Its primary function being the quick and accurate analysis of complete blood counts (often referred to as CBC). The CBC is used to determine the number or proportion of white and red blood cells in the body. Previously, this procedure involved preparing a blood cell stain and manually counting each type of cell under a microscope, a process that typically took a half hour.

Coulter Counters have a wide variety of applications including paint, ceramics, glass, molten metals and food manufacture. They are also routinely employed for quality control.

Due to the simple construction of these devices and the reliable sensing method, Coulter devices have found application in a broad range of particle analyses from blood cells to polymeric beads, DNA, virus particles and even metal ions. Quantitative measurements of the size and concentration of micro and nano scale particles has been accomplished using Coulter counters with reduced microchannel size so that particles pass one by one from one chamber to the other. Because this would substantially extend measurement times, multiple microchannels are used to reduce measurement times by counting particles in parallel with one another.

Another use of the Coulter principle is found in Scanning Ion Occlusion Spectroscopy (SIOS). Here a deformable membrane with a single nano-size aperture is used in order to characterize individual nano-scale particles during their transition across driven by either pressure or an electric field.