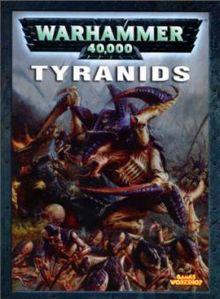 The Cover of the 4th edition Tyranids sourcebook, Codex: Tyranids

The Tyranids are a fictional race from the Warhammer 40000 tabletop game and its spin-off media. They are known to the Imperium generally as Tyranids, because Tyran is the first known planet they devoured and where they were first encountered. Luckily for the Imperium Inquisitor Kryptman found oral data concealed on one of the databases on Tyran and dedicated the rest of his life to exterminating the new foe.

They are a nomadic alien race comprising many genetically engineered forms created from harvested bio-mass. They are known as the "Great Devourer" and also "Shadow In The Warp" (after the effect of their hive mind on FTL travel and communications) and pose a severe threat to the Imperium.[1] They seek to consume all in their path, draining all planets of every resource and converting all living and some non-living material into Tyranid biomass.

Tyranids were first described in Rick Priestley's Rogue Trader, the first edition of the Warhammer 40,000.[2] At that time they were not an emphasized race in the game, instead representing a limited number of occasionally encountered alien antagonists. Their physical appearance was not imposing or especially horrific: they were depicted as six limbed, relatively diminutive creatures (an appearance which would later be assigned to Tyranid termagants). In later iterations of WH40K-related products (starting with the release of Advanced Space Crusade) the Tyranids were given a complete makeover and became a major race, popularized by a number of successful expansions. Unlike most Warhammer 40,000 races, the Tyranids do not have a Warhammer Fantasy Battle counterpart.

Tyranids typically form a fast-moving close-combat army that relies on overwhelming its enemies through waves and waves of mostly small but infinitely deadly creatures. They may also be bio-morphed to rely heavily on ranged combat, or field an impressive but small array of monstrous titans rather than a typical swarm. Tyranid armies are therefore able to bring a varied threat to bear on their opponents.

The hive fleets so far introduced by Games Workshop include Hive Fleet Behemoth, Hive Fleet Kraken, and Hive Fleet Leviathan.(There are also other splinter fleets which are big enough to class as hive fleets) It is noted that these names are those ascribed to the Tyranid incursions by the scholars of the Imperium, rather than the Tyranid civilization themselves. There is no evidence shown in the fiction that Tyranids have language or civilization as understood by the protagonist civilizations native to the Milky Way. In many stories they communicate with a complex array of insectile clicking and buzzing noises, as well as reptilian war cries, growls and hissing sounds. Tyranids are thought to communicate via a strong synaptic link to the hive mind. The synaptic conductors use the link to press the Tyranids onwards, communicating with them telepathically.

Games Workshop introduced Genestealers in the 1980s in the game Space Hulk, and later included them in Space Crusade, along with the short-lived Genestealer Magus. The first recognizable incarnation of Tyranid warriors appeared in Advanced Space Crusade in 1990, featuring biological weaponry such as boneswords and deathspitters.[3]

Tyranids were first mentioned under the heading Tyranids and the Hive Fleets in Warhammer 40,000: Rogue Trader, and were illustrated in a form not too different from that of Gaunts.[2]

The first Tyranids used conventional, non-biological equipment such as lasguns and flak armor (although the rulebook stated that these represented organic equipment with similar capabilities).[4] The principal unit available to the Tyranids was the Zoat, a centaur-like creature enslaved to fight on the behalf of their Tyranid masters.

Second Edition Warhammer 40,000, released in 1993, featured the Tyranids in the supplemental books Wargear and Codex Imperialis, and then later in their own devoted army Codex. An extensive model range was released, representing most of the units described in these publications. The army was, however, very different from the factions previously seen in the game.[5]

The Tyranid player now had access to a range of unit types roughly equivalent to that of the other factions, including the Hive Tyrant, Termagants, Hormagaunts, the main adversary in Space Hulk Genestealers, Gargoyles previously seen in Epic 40,000, Tyranid Warriors, the Carnifex, Zoanthropes (a Tyranid psyker in addition to the Hive Tyrant), Lictors, and the Biovore.

In the Tyranid supplement to Third Edition Warhammer 40,000 there was an emphasis on revamping the rules for the various units while maintaining the overall structure of the army, so that veteran players would not find their older collections unusable or less useful in the new edition. The supplement did however add some new units and adjust the behavior of others. A brand-new model range, somewhat different from the older one, was released to coincide with the new publication.[6] New units included: the Tyrant Guard and Raveners.

The Third Edition Codex, as with a number of subsequent publications, included an army list which permitted far greater flexibility to the player than previous army lists, allowing extensive customization of units. Unit types noted as a 'Mutable Genus' in the main army list were permitted to be extensively modified by choosing from numerous options in the 'Custom Hive Fleet' section of the book. The options available bore a resemblance to the random equipment tables featured in Rogue Trader, but were no longer randomized.

The nature of the army list in Third Edition further cemented the Tyranid army's reputation for fielding vast numbers of models, allowing the player to overwhelm an opponent with weight of numbers. This was even more pronounced in the variant Seeding Swarm army list published in White Dwarf and later in Chapter Approved, which represented the initial stages of a massive Tyranid assault and even further emphasized the use of many expendable, 'cannon-fodder' type units.[7] One of the more overlooked abilities is the new "without numbers" rule, which allowed for literally an unlimited number of gaunts in a single game, emphasizing the "cannon-fodder" trait of the Tyranids.[8]

The release of the fourth edition codex added a new model range, new rules, and new units, most notably the Broodlord, and revamped units such as the Carnifex. This new codex also enables Tyranid players to field a grand total of eight large Tyranids to be fielded in a 1500 point battle, although the player would still have to field compulsory troop choices. With this concept Tyranid armies can now boast either the many troops and/or a just few powerful units.

A new Tyranid codex was released on January 16, 2010, written by Robin Cruddace. It included 15 new species of Tyranid, and legendary heroes like the Swarmlord, Old One Eye and the Doom of Malan'tai. In addition, some models saw a point cost reduction, which allowed certain Tyranid armies to field more units, though, notably, this was not the case for all Tyranid units, as several saw point increases in this edition, such as the Carnifex and Hive Tyrant. Carnifex's now costing more than double the amount they used to and they have also been "snubbed" to a weaker monster. The Syanpse rule of immune to instant death has gone, as has Living ammunition. The reduction of strength of the Tyranids has being welcomed with many new shooting weapons, the return of the bonesword and many additions to deep strike such as the Mawlocs, S6 Ap2 ordance blast deepstrike rule. Also Carnifexes now are very susceptible to Terminators with thunder hammers and stormsheilds.

The Battle for Macragge

The tyranids were a main part of the fourth edition of warhammer 40k due to their presence in the boxed game released in 2004. In the set, there was 8 genestealers, 8 termagauts and 8 spore mines. Famed for their close combat attacks, tyranids were chosen to be the aliens who were set about destroying the Ultramarines homeworld of Macragge. Even though they failed in their attempt, they managed to wipe out the 1st company of Ultramarines, a feat never repeated by another race.

The Tyranids are represented in three of the Specialist Games produced by Games Workshop: Battlefleet: Gothic, Epic, and Inquisitor.

In Battlefleet: Gothic, a game focusing on spaceship to spaceship combat, they are represented by four models that represent the massive ships of the Tyranid Hivefleet.[9] In Epic, the game of large scale combat using smaller miniatures, they are represented by a combination of Titans and standard Tyranid troops.[10][11] In Inquisitor, the narrative skirmish game using Warhammer 40,000 type characters, the Tyranids are represented by the Genestealer and Hybrid models[12] under the generic roleplaying category of "aliens." They are individual members of the Genestealer Cults who work towards espionage and propagating their species in secret to weaken a planet's defenses before an invasion, as opposed to being part of the Hivefleet army that seeks to swarm over all in their path and consume them.[9]

Warhammer 40,000: Dawn of War II currently includes Tyranids as a playable race along with the Imperial Guard, Chaos Space Marines, Eldar, Orks, and Space Marines. The playable heroes include the Ravener Alpha, Lictor Alpha, and a Hive Tyrant, and the Tyranids act as the primary enemy in the single player campaign.[13] However, in the expansion Retribution, they are a playable race in the Campaign. Also, the Tyranids are one of the few Warhammer 40,000 factions that were not in the original game, Warhammer 40000: Dawn of War. The fact that Tyranids were not present is likely due to their nature; as Tyranids do not create structures or technology in the same way as the other races (not to mention the lack of usable wargear because of this), it would be difficult to have them perform as the other races do in the game. Relic has also repeatedly stated[citation needed] that they wanted to include the Tyranids in Dawn Of War, but the game's graphic engine "wouldn't do them justice". Other issues cited included significant differences in economy.