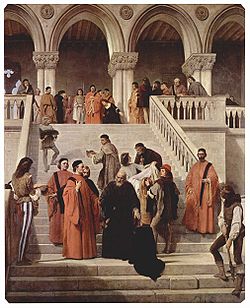 The Council of Ten, or simply the Ten, was, from 1310 to 1797, one of the major governing bodies of the Republic of Venice whose actions were often secretive. Although some sources may indicate that the Council of Ten was generally accepted in Venice, there was some opposition. For example, in the late sixteenth century, they had become allied with the Jesuit Society of Jesus and, with them, fought against libertine ideas perpetuated at the University of Padua in a larger cultural war.

The Council of Ten was created on July 10, 1310; it was intended as a temporary response to the revolt led by Bajamonte Tiepolo against the Doge, and was given emergency powers to deal with the resulting unrest. Although originally established for a period of two months, its authority was continuously renewed, until it became a permanent body in 1334.

The Council was formally composed of ten members, elected for one-year terms by the Great Council. In practice, its sessions were expanded to 17 members by including the Doge and others of the Signoria. For major questions, the number could be further increased by summoning some number of additional Senators, who composed the zonta; however, this practice was rarely used after 1583.

Members of the Council could not be elected for two successive terms, nor could two members from the same family be elected simultaneously.

Leadership of the Council was vested in three Capi, who were elected from among the ten members for one-month terms. During the month in which they served, they were confined to the Doge's Palace in order to prevent corruption or bribery.

The Council was formally tasked with maintaining the security of the Republic and preserving the government from overthrow or corruption. However, its small size and ability to rapidly make decisions led to more mundane business being referred to it, and by 1457 it was enjoying almost unlimited authority over all governmental affairs. In particular, it oversaw Venice's diplomatic and intelligence services, managed its military affairs, and handled legal matters and enforcement, including sumptuary laws. The Council also made numerous, though mainly unsuccessful, attempts to combat vice, particularly gambling, in the Republic.

In 1539, the Council established the State Inquisitors, a tribunal of three judges chosen from among its members to deal with threats to state security. The Inquisitors were given equal authority to that of the entire Council of Ten, and could try and convict those accused of treason independently of their parent body. To further these activities, the Inquisitors created a large network of spies and informants, both in Venice and abroad.

The increasing power of the Council of Ten caused some concern among the other governing bodies of the Republic, particularly after the Ten forced the resignation of Doge Francesco Foscari in 1457. In 1468, the Great Council attempted to curb what it considered to be despotic rule on the part of the Ten by passing a law limiting the Ten to ruling only on emergency matters, but these limitations were never enforced in practice.

In 1627, Renier Zen, one of the Capi of the Ten, began a campaign against what he saw as despotism and corruptions on the part of the Council. The immediate pretext for his complaints was the reluctance of the Council to deal with the relatives of Doge Giovanni Cornaro who had been elected to certain posts in contravention of Republic law. On October 27, Zen caused an uproar at a meeting of the Great Council by accusing the Cornaro family of corruption; although the elections were annulled, he was unable to obtain any further sanctions.

On December 30, Renier Zen was attacked by masked assassins, who were later found to include Giorgio Cornaro, the son of the Doge. At the meeting on July 23, 1628, Zen called for laws to be upheld, claiming that the Doge and the Ten were subverting the government of the Republic. Later that day, the Ten met and voted to arrest and exile Renier Zen.

By this point the Great Council had begun to move, appointing a special committee of correctors to examine proposals for reform. By September, however, it had become overwhelmed with procedural matters, and while it would eventually pardon Zen, it failed to produce any significant reforms. The Ten lost the ability to review decisions of the Great Council, and the zonta was formally discontinued, but otherwise their powers were left unchecked.

In the latter half of the 17th century the power of the Council began to decline. While it maintained its formal authority, it became increasingly incapable of preventing corruption, both within its own ranks and within the Republic at large. By the 18th century its role was largely limited to suppressing the minor plotting of the poorer members of the nobility, although the Ten continued to attempt at reasserting their authority until the fall of the Republic and the dissolution of the Council in 1797.

Because this article has no footnotes and only one dated secondary source, not only is its scope limited but some of the views may be biased in some way. Other sources my be helpful.