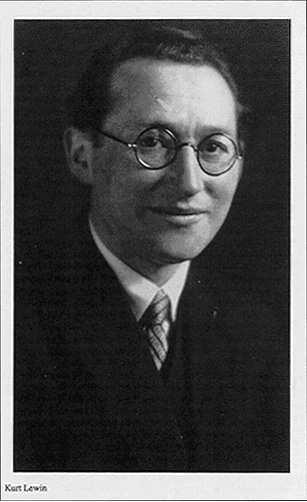 Kurt Zadek Lewin (1890 - 1947), a German-born psychologist, is one of the modern pioneers of social, organizational, and . [In an empirical study by Haggbloom et al using six criteria such as citations and recognition, Lewin was found to be the 18th most eminent psychologist of the 20th Century. Haggbloom, S.J. et al. (2002). The 100 Most Eminent Psychologists of the 20th Century. "Review of General Psychology". Vol. 6, No. 2, 139–15. Haggbloom et al combined 3 quantitative variables: citations in professional journals, citations in textbooks, and nominations in a survey given to members of the , with 3 qualitative variables (converted to quantitative scores): (NAS) membership, American Psychological Association (APA) President and/or recipient of the APA Distinguished Scientific Contributions Award, and surname used as an eponym. Then the list was rank ordered.]

Lewin is often recognized as the "founder of social psychology" and was one of the first researchers to study and .

Lewin had originally been involved with schools of behavioral psychology before changing directions in research and undertaking work with psychologists of the Gestalt school of psychology, including and . Lewin often associated with the early , originated by an influential group of largely Jewish Marxists at the in Germany. But when Hitler came to power in Germany in 1933 the Institute members had to disband, moving to England and then to America. In that year, he met with , of the London . Trist was impressed with his theories and went on to use them in his studies on soldiers during the Second World War.

Lewin emigrated to the in August 1933 and became a in 1940. Lewin worked at Cornell University and for the Child Welfare Research Station at the University of Iowa. Later, he went on to become director of the Center for Group Dynamics at MIT. While working with at in 1946, Lewin received a phone call from the Director of the requesting help to find an effective way to combat religious and racial prejudices. He set up a workshop to conduct a 'change' experiment, which laid the foundations for what is now known as . In 1947, this led to the establishment of the , at , . believed that sensitivity training is "perhaps the most significant social invention of this century."

Following WWII Lewin was involved in the psychological rehabilitation of former occupants of displaced persons camps with Dr. at . When and wrote to Lewin proposing a journal in partnership with their newly founded and his group at , Lewin agreed. The Tavistock , Human Relations, was founded with two early papers by Lewin entitled "Frontiers in Group Dynamics". Lewin taught for a time at [http://www.phy.duke.edu/people/HerthaSponer/RefugeeScholarsAtDukeUniversity.pdf] .

Lewin coined the notion of , [ Lewin, K. (1922). "Der Begriff der Genese in Physik, Biologie und Entwicklungsgeschichte." (Lewin's Habilitationsschrift)] which has gained some importance in various theories of and related fields. He also proposed 's interactionist perspective of 1937 as an alternative to the debate. Lewin suggested that neither nature (inborn tendencies) nor nurture (how s in life shape individuals) alone can account for individuals' behavior and personalities, but rather that both nature and nurture interact to shape each person. This idea was presented in the form of for behavior B=ƒ("P,E").

Prominent psychologists mentored by Kurt Lewin included (1919 - 1989), who became known for his theory (1956), environmental psychologist , , and , the founder of modern conflict resolution theory and practice.

is one of the most influential developments in the field of social science. It provides a framework for looking at the factors ("forces") that influence a situation, originally social situations. It looks at forces that are either driving movement toward a goal (helping forces) or blocking movement toward a goal (hindering forces). The principle, developed by Kurt Lewin, is a significant contribution to the fields of , , , , , and . [Lewin K. (1943). Defining the "Field at a Given Time." "Psychological Review." 50: 292-310. Republished in "Resolving Social Conflicts & Field Theory in Social Science," Washington, D.C.: American Psychological Association, 1997.]

Lewin, then a professor at MIT, first coined the term “” in about 1944, and it appears in his 1946 paper “Action Research and Minority Problems”. [Lewin, K. (1946) Action research and minority problems. J Soc. Issues 2(4): 34-46] In that paper, he described action research as “a comparative research on the conditions and effects of various forms of social action and research leading to social action” that uses “a spiral of steps, each of which is composed of a circle of planning, action, and fact-finding about the result of the action”.

Lewin often characterized organizational styles and s in terms of climates defined by (1) , (2) and (3) work environments. Authoritarian environments are characterized where the leader determines policy with techniques and steps for work tasks dictated by the leader in the . The leader is not necessarily hostile but is from in work and commonly offers personal praise and criticism for the work done. Democratic climates are characterized where policy is determined through collective processes with decisions assisted by the leader. Before accomplishing tasks, perspectives are gained from group discussion and technical advice from a leader. Members are given s and ly decide the division of labor. and in such an environment are objective, fact minded and given by a group member without necessarily having participated extensively in the actual work. Laissez faire environments give freedom to the group for policy determination without any participation from the leader. The leader remains uninvolved in work decisions unless asked, does not participate in the division of labor, and very infrequently gives praise. (Miner 2005: 39-40) [ cite book | last = Miner| first = J. B. |year = 2005| title = "Organizational Behavior: Behavior 1: Essential Theories of Motivation and Leadership"| publisher = M.E. Sharpe | location = Armonk| isbn = ]

An early model of change developed by Lewin described change as a three-stage process. The first stage he called "unfreezing". It involved overcoming inertia and dismantling the existing "mind set". Defense mechanisms have to be bypassed. In the second stage the change occurs. This is typically a period of confusion and transition. We are aware that the old ways are being challenged but we do not have a clear picture as to what we are replacing them with yet. The third and final stage he called "freezing". The new mindset is crystallizing and one's comfort level is returning to previous levels. This is often misquoted as "refreezing" (see Lewin K (1947) Frontiers in Group Dynamics).

The equation is the psychologist's most well known formula in , of which Lewin was a modern pioneer. When first presented in Lewin's book "Principles of Topological Psychology", published in 1936, it contradicted most popular theories in that it gave importance to a person's momentary situation in understanding his or her behavior, rather than relying entirely on the past. [cite book | last = Balkenius | first = C. |year = 1995| title = "Natural Intelligence in Artificial Creatures"| publisher = Lund University Cognitive Studies, 37 | location =| isbn = 91-628-1599-7 | url=http://www.lucs.lu.se/People/Christian.Balkenius/Thesis/Chapter04.html]