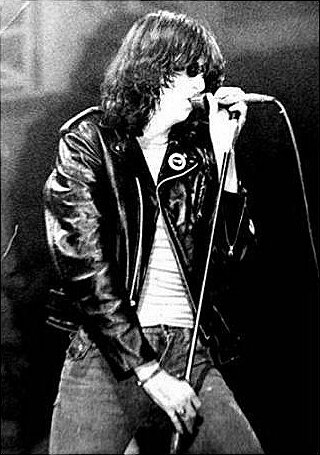 Joey Ramone ( – ), born as Jeffrey Ross Hyman, was a vocalist and best known for his work in the group the . Joey Ramone's image, voice and tenure as frontman of the Ramones made him a countercultural icon.

Hyman grew up in Forest Hills, . He and his future bandmates attended .

During his youth, he was by general accounts something of an outcast and had a dysfunctional family life, which inspired the song "We're A Happy Family." His parents divorced in the early 1960s. His mother, Charlotte Lesher (1926-2007), encouraged an interest in music in both him and his brother Mitchell (a.k.a. ).

Rock & roll gave the teenaged Joey Ramone an escape from his parents' divorce and he began playing in glam-influenced bands in the early '70s. He co-founded the Ramones in 1974 with friends John Cummings and Douglas Colvin, upon which point all three adopted Ramone as their stage surname. Joey Ramone initially served as the group's drummer before switching to vocals and having his former spot taken by manager Tommy Erdelyi.

He was a fan of , [ [http://news.bbc.co.uk/1/hi/entertainment/music/1279856.stm BBC News | MUSIC | The musical misfits ] ] , among other bands (particularly "" and the -produced "Girl Groups"). His hero was Pete Townsend of The Who. He took up drums at 13, playing throughout his teen years, and was originally the drummer for the Ramones, while was the vocalist. However, Dee Dee proved to be unsuited for the position as he could not play his bass guitar and sing at the same time, so on 's suggestion, Joey switched to vocals. [http://allmusic.com/cg/amg.dll?p=amg&sql=11:h9fyxqtgldde~T1]

Hyman was said to be the "heart and soul" of the Ramones, and his favorite songs from their repertoire were often the ballads and love songs. called him the "hippie of the group."

The Ramones were an American rock band often regarded as the first punk rock group. Formed in Forest Hills, Queens, New York, in 1974, all of the band members adopted stage names ending with "Ramone", though none of them were actually related. They performed 2,263 concerts, touring virtually nonstop for 22 years. In 1996, after a tour with the Lollapalooza music festival, the band played their final show and then disbanded. A little more than eight years after the breakup, the band's three founding members—lead singer Joey Ramone, guitarist Johnny Ramone, and bassist Dee Dee Ramone—were dead.

The Ramones were a major influence on the punk rock movement both in the United States and Great Britain, though they achieved only minor commercial success. Their only record with enough U.S. sales to be certified gold was the compilation album Ramones Mania. Recognition of the band's importance built over the years, and they are now regularly represented in many assessments of all-time great rock music, such as the Rolling Stone lists of the 50 Greatest Artists of All Time [5] and 25 Greatest Live Albums of All Time, VH1's 100 Greatest Artists of Hard Rock, and Mojo's 100 Greatest Albums. In 2002, the Ramones were voted the second greatest rock and roll band ever in Spin, trailing only The Beatles.

In 1985, Joey joined Little 's music-industry activist group which acted against the Sun City resort in . Joey and forty-nine other top recording artists, including , , and , collaborated on the song "Sun City" in which they pledged they would never perform at the resort.

In 1994, he formed Sibling Rivalry with his brother Mickey Leigh. They had one release, the "" EP.

Hyman co-wrote and recorded the song "Meatball Sandwich" with . For a short time before his death, he took the role of manager and producer for the punk rock group . [ [http://www.theindependents.net/bandbio.htm Independents band bio] ]

His last recording as a vocalist was singing backup vocals on the CD "One Nation Under" by the Dine Navajo rock group Blackfire. He appeared on two tracks, "What Do You See" and "Lying to Myself". The CD, released in 2002, won "Best Pop/Rock Album of the Year" at the 2002 Native American Music Awards.

Joey also produced the album in 1999,It was critically acclaimed, but did not perform too well with the public and went virtually unnoticed. The Title track was previously on last studio album, "".

He was listening to the song "" by when he died.

His solo album "" was released posthumously in 2002, and features the single "", a cover of the standard. The song was featured in a 2001 episode of "" and is included on "", the show's official soundtrack. The recording was also used for the closing credits for the documentary "". It also features "Maria Bartiromo," a tribute to a financial-news broadcaster. More recently, his cover of "" has been used in a 2007 advertisement for the PS3 iteration of and was also used to open the release celebration for and 2007.

Joey died the year (2001) the Ramones were named as inductees to the Rock and Roll Hall of Fame, prior to the actual ceremony held early the following year (2002).

Ramone's vocal style was unorthodox in that he had no formal training in an era where vocal proficiency was arguably the norm for most rock bands. His signature cracks, hiccups, snarls, crooning and youthful voice made his one of punk rock's most recognizable voices. Allmusic.com claims that "Joey Ramone's signature bleat was the voice of punk rock in America."

* [http://www.joeyramone.com The Official Joey Ramone Website]
*Monte A. Melnick Ramones Tour Manager "On The Road With The Ramones" [http://www.myspace.com/ontheroadwiththeramones]