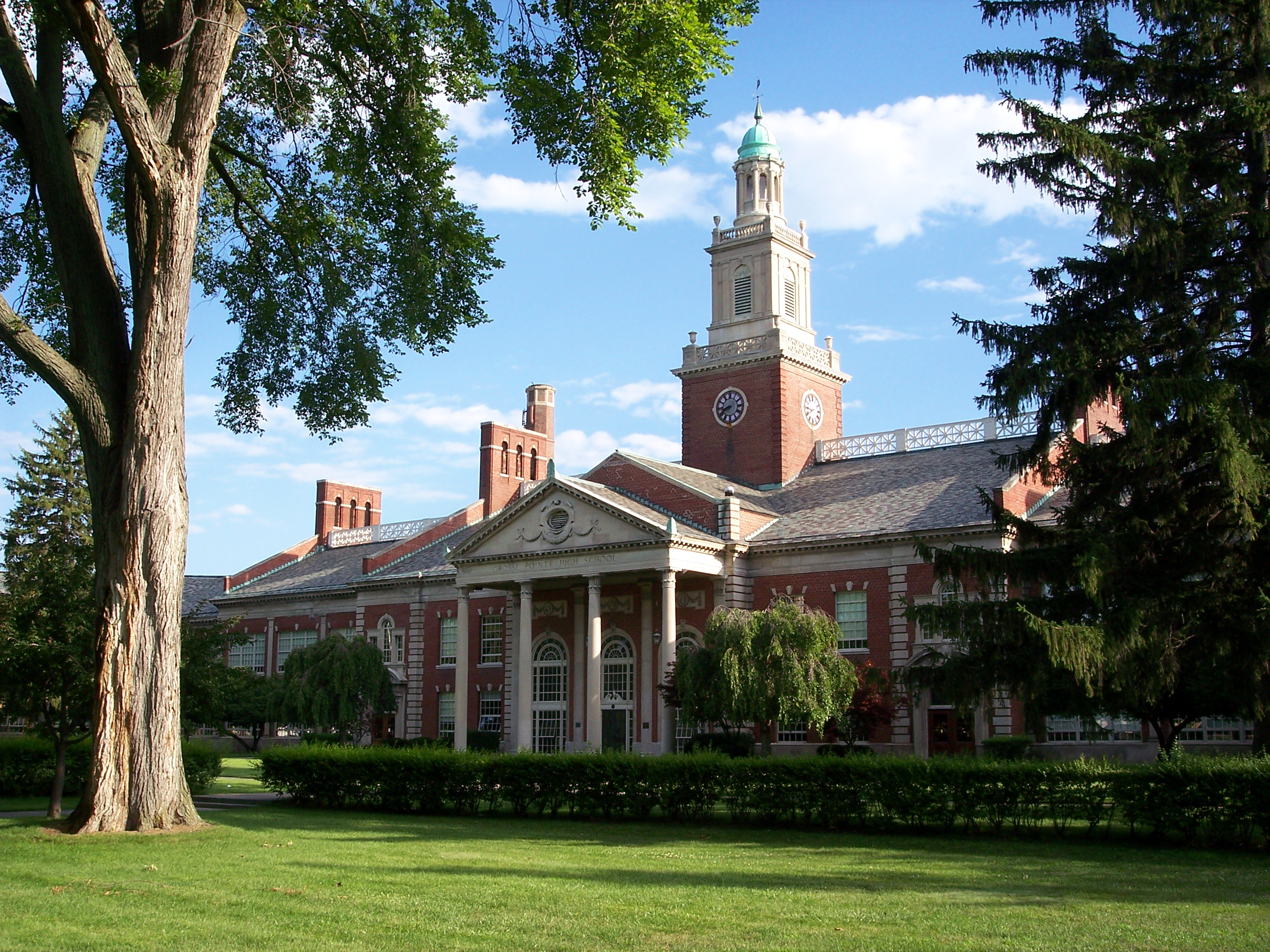 The construction of The Grosse Pointe High School in 1928 marked an important transition in the history of this area along the shores of . 's move away from its farming community began after the , when wealthy businessmen purchased much of the lakefront property for summer homes. By 1900, year-round mansions were rapidly replacing seasonal residences, and a sense of community had begun to form.

Reflecting many citizens' growing perception that Grosse Pointe was a real town, the need for a high school became a topic of debate in 1910. After a five-year battle with landowners reluctant to have their land condemned, the school district began the construction of the area's first public high school in 1927. Many residents saw the construction as a symbol that had made the transition from resort to town and so were willing to pay for one of the finest public school buildings in .

Grosse Pointe High School has a Georgian revival colonial style building design and a convert|134|ft|m|sing=on-tall clock tower that dominates the facade. The interior is similarly impressive: The school opened with five libraries, two gyms, an auditorium, and a swimming pool, amenities some thought too luxurious. Tennessee marble and Pewabic tiles were used lavishly. During the , the interior received a beautiful series of -funded murals and the area's growing population led to additions in the 1940s and 1950s. It became Grosse Pointe South in 1967 when the school board built another high school, Grosse Pointe North.

To make room for students, the Board of Education offices were moved back to Cadieux Elementary School. Board offices remain there today. Student and faculty sizes have varied, but the building always ranged from packed to comfortably full.

During construction, the over 10-story tall, convert|107|ft|m|sing=on-high boiler room smokestack was the tallest structure in . The convert|134|ft|m|sing=on-tall clock tower that has become the symbol of Grosse Pointe High was finished three months after the smokestack.

In April 1953 Grosse Pointe High had its main gym completed, complete with a stage for large assemblies. For the students' evening dedication ceremonies, a public relations coup was pulled off, when Board of Education member and travel agent Chet Sampson delivered the newly married, romantic idols of America, and Eddie Fisher.

The back end of the school was filled with ninth graders in the fall of 1955. The annex was linked to the main building with a roofed-only walkway that was called the breezeway or freezeway depending upon the weather.

In February 1961, work was started on adding a third floor to the industrial arts building. In March, the Board of Education authorized the construction of a second-story bridge to the main building to give easier access to the new third floor. In the fall of 1961, just nine months after starting, students were crossing the bridge and attending math classes in the new third floor.

The octagonal Wicking Library was completed and occupied for school during the fall of 1964, ending Cleminson Hall's reign as the school's reference site. A brick and steel breezeway that joined the main building to the annex crossed its front. It was a great day when the glass was finally installed to winter-proof it.

By September 1964, it has become obvious that the s were in need of a new high school. The Board of Education purchased the convert|31.7|acre|m2|sing=on Vanderbush Farm, the sole remaining such parcel in , and built . It opened in the fall of 1968.

This ended the 40-year reign of this building as the only high school in . The school was renamed Grosse Pointe South High School and became a four-year high school as it remains today.

The Wicking Library was then South's newest portion. Certainly the library in the parking lot didn't satisfy educators who thought that a library could be the center of instructional activity. Many classrooms in the school needed replacement. The music facilities were poor.

The plan to solve these problems showed a small addition on the left, a new hallway across the rear of the plant, and rooms surrounding the library. The music department would get two big practice rooms and a classroom. A large two-story structure was planned to surround the library. When the plans were revealed, everyone was happy that the definitely modern building would be around the corner from the traditional Georgian Facade.

In September 1973, the new wing was completed. South now had first-class science labs and social studies classrooms, appropriately naming the new addition the “S-Building.” In addition to the new classrooms, South gained a new 116-seat lecture hall. Now attention was swung to the other side of the building.

This building project altered and added to the portion of the arts building that was severely overcrowded. An area with tennis courts was selected for the expansion. These were later replaced on top of the industrial technology shops. The top floor of math rooms was unchanged. A modern photography classroom and lab sat next to a new drafting room. Two modernized art rooms provided general and commercial art classes with fine homes. The first floor featured a fine drawing and painting studio, a superlative ceramics, sculpture, and metals laboratory, and an art appreciation lecture classroom.

The industrial technology department started in earnest in the remodeled basement. The sprawling underground addition started with the parking and outdoor service area of the four-bay automotive shop backed up by a sophisticated wood and metal shop and a TV studio.

The cinder tract of the football field did not meet the needs of the expanded athletic programs that came as our nation discovered jogging and the track and field events. A major project modified this, providing an all-weather track. That same all-weather track could not be walked upon with high heels, and since 1969, South had been seating a thousand parents on the cinder track for its outdoor graduations.

With the help of the internationally famous George P. Johnson display company, this ceremony moved to the front lawn in 1980. The artists from George P. Johnson Co. also reworked the school seal for the speaker's podium, giving the school a modern version for all purposes.

In 2003, Grosse Pointe South celebrated its 75th Anniversary with a series of commemorative events and guest speakers.

Over the past few years, the school has undergone a number of major renovations and additions under the watchful eyes of Principal Dale Allan Diver and Superintendent Dr. C. Suzanne Klein. In 2004, the renovation of the school's auditorium was completed, allowing seating for 400 students. In 2005, the so-called "New S-Building" was completed to add a large number of science classrooms. Renovations in 2006 are ongoing, as the original S-Building is receiving a face lift to upgrade its outdated facilities and small classrooms. Now South is currently undertaking the building of a new competition pool and a field gym along Fisher Rd. between the main building and stadium. The design of the new building will mimic the main 1928 building, with Georgian revival architecture. The competition pool replaces its outdated pool, which was no longer standard competition size. The pool is scheduled to be finished by September of 2008, with the field gym being finished soon after. There are also plans to renovate one of the older gyms into a choral multi-purpose room.

South has an ongoing tradition of excellence, shown by organizations like The Tower (award-winning student newspaper), The Viewpointe (yearbook) and The Looking Glass (literary magazine). In 2007, five South students received the National Merit National Scholar award, including one Junior. South students also perform well in the National Merit Scholarship competition (12 Finalists from the class of 2007, 8 from the class of 2008).

Grosse Pointe South hosted a landmark speech by Dr. on , , when 2700 people gathered in the gymnasium to hear a speech aptly entitled "The Other America," just three weeks before his assassination. Dr. King had already visited many times, led huge marches through the city, and gave an early version of his "I have a dream" speech in downtown Detroit, but this was landmark because it was delivered in what was one of the whitest, most conservative cities in the north. About 200 picketers greeted King outside of the school, but the event went on without any disturbance. The Grosse Pointe Historical Society (website link under the references section of this page) has the text and audio of this speech on its website.

South has consistently been named one of the top show choirs in the nation. They have won Showstoppers, a national show choir competition, multiple times, as well as hosting the competition twice. In addition, the choir has had several international performances including singing mass at St. Peter's Bacillica in The Vatican City. Recently, the choir traveled to Spain where they visited Barcelona, Valencia, Madrid and Segovia. The choir performed a show choir show and a classical show. The choir also sang a high mass at the Barcelona Cathedral.

Grosse Pointe South has a student newspaper that is as old as the school itself. The Tower has been winning awards as a top newspaper at the state and national level for decades, with many of its writers garnering individual awards at different levels each year. The Tower has its own two-room office and classroom at the front of the old building. Recently the Tower room had ribbon cutting ceremony for the new Ronald Bates, former deceased Student Association president, memorial telecommunications center. The ceremony was a hit, Class President, S.A President, National Honors Society President, and Julia Poirier were present.

The newspaper was close to being featured on the MTV show "The Paper," but the show was cancelled. A film crew came in from MTV Studios and spent a long weekend with the staff, and filmed events like the Editor-in-Chief announcement.

South finished the 2006-07 season with a 15-6 record. They finished third in the MAC White, losing their first State Tournament game to Detroit Finney.South basketball season starts on the road , at Eisenhower. The home opener is , vs. East Detroit. South 2007-08 is led by coach Jim Twigg. He was the assistant coach for the 2006-07 team.

The men's cross country team has attended the state tournament for 17 straight years. Last fall (), South ranked 16th overall in the Division I race with a combined score of 414. The team is coached by Tom Wise and Mike Novak.

The Grosse Pointe South swim team took a hit after losing 12 seniors in 2005 when they finished 4th in the state meet. A year later 8 more seniors graduated leaving the team to be led by 3 seniors the next year. The 2007 season turned out to be a tough year losing to rival University of Detroit Jesuit. South won the meet against a new member of the MAC Red division Lance Cruise Lancers giving the Blue Devils the division meet champions. The fierce Lancers came back hard at the Blue Devils in the MAC Red division meet. After the prelims it was almost clear that the Lancers were going to take away the Blue Devils MAC domination streak when swimmers such as Danny Basile, and Michael Manos stepped up and South defeated the Lancers by 2 points. This was an amazing comeback and a great finish for the most of the Blue Devils Season. Jordan Long, the state diver, had a great season finishing 4th in the state meet. Danny Basile finished 5th in the 500 free while freshman Michael Shook finished 11th in the event and freshman Pete Basile finished first in the 200 freestyle with a state record time of 1:34.50. Jack Hessburg, J.P. Lang, and Robby Mullinger are leading the team as captains in the 2007-2008 season.

Pointe Players is Grosse Pointe South's student theater organization. It is Troupe #49 of the International Thespian Society.At the beginning of the 2004-2005 school year, Lois Bendler took over as sponsor and revived many of the club's ritual activities and events.