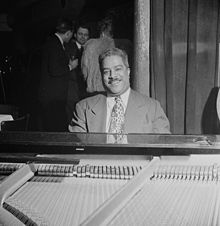 Cliff Jackson at the piano in 1947. Photo by William P. Gottlieb.

After playing in Atlantic City, Jackson moved to New York City in 1923, where he played with Lionel Howard's Musical Aces in 1924 and recorded with Bob Fuller and Elmer Snowden. He led his own ensemble, the Krazy Kats, for recordings in 1930, and following this group's dissolution he played extensively as a solo pianist in nightclubs in New York. During this time he also accompanied singers such as Viola McCoy, Lena Wilson, Sara Martin, and Clara Smith. He recorded with Sidney Bechet in 1940-41 and recorded as a soloist or leader in 1944-45, 1961, and 1969. As house pianist at Cafe Society from 1943-51 he was a great success; he also toured with Eddie Condon in 1946. He also played with Garvin Bushell (1950), J.C. Higginbotham (1960), and Joe Thomas (1962).

He was married to singer Maxine Sullivan. He died of heart failure in 1970.

As shown by many of his 1944-1945 solo piano recordings, such as "Limehouse Blues", Cliff Jackson was certainly one of the most powerful stride piano masters. His style was also marked by a very interesting contrapuntal-like bass work. His many left hand techniques are found explained in detail in Riccardo Scivales's method Jazz Piano: The Left Hand (Bedford Hills, New York: Ekay Music, 2005).