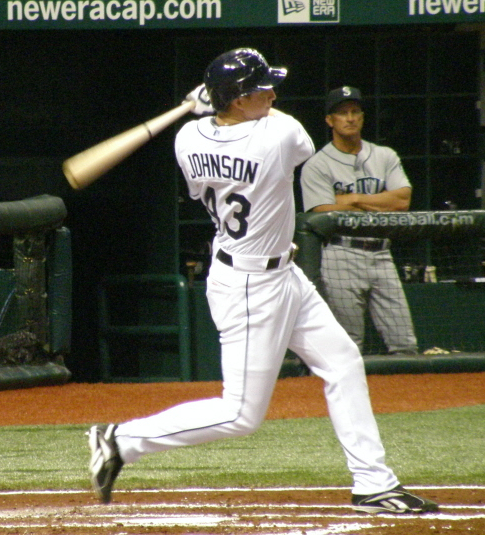 Elliot Tyler Johnson (born , , in city-state|Safford|Arizona) is a for the .

Johnson made the opening day roster for the by|2008 season. On , 2008, Johnson made his debut against the , as the teams . He had four at bats and recorded his first major league hit, a single.

On , by|2008, in a game involving the and at Steinbrenner Field (formerly Legends Field) [cite web| title = Legends Field Gets New Name| url=http://www.sptimes.com/2008/02/15/Hillsborough/Legends_Field_gets_ne.shtml|accessdate = 2008-03-23] in city-state|Tampa|Florida, a ninth inning play at the plate involved Johnson, and Yankee Catching prospect . With the Rays already leading the game, Johnson rounded third base as the Yankees threw the ball to home plate in an attempt to tag him out before scoring. Instead of sliding, Johnson decided to collide with Cervelli, in an attempt to knock the ball loose from Cervelli's glove, which caused Cervelli's wrist to fracture. Yankee manager believed the play was "uncalled for" and said, "I'm all for playing hard, but I don't think it's the time when you run over a catcher in Spring Training." Rays manager called the play "hardball," and that there was nothing at all dirty about the play. [cite web| title = Broken wrist polarizes Yanks, Rays| url=http://mlb.mlb.com/news/article.jsp?ymd=20080308&content_id=2413856&vkey=spt2008news&fext=.jsp&c_id=tb|accessdate = 2008-03-23]

Former Yankee bench coach, and current Rays' Senior Advisor disagreed with Girardi's comments, saying "I am surprised the way Girardi said what he did. The plate was blocked, and our guy bowled him over. That's the way to play the game. I mean, I'm talking about a guy who is like a son to me. But I can't believe he went after it the way he did, because that's not Joe Girardi -- and being a catcher on top of that." [cite web| title = Rays' Zimmer weighs in on collision| url=http://mlb.mlb.com/news/article.jsp?ymd=20080309&content_id=2414680&vkey=spt2008news&fext=.jsp&c_id=tb|accessdate = 2008-03-23]

Johnson spoke on the incident saying that he never intended to hurt Cervelli, and that if he was safe on the play, and no one was injured, then it was no big deal.