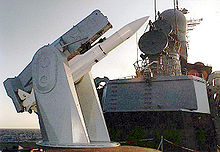 The Mk-13 guided missile launching system (GMLS) is a single-arm missile launcher designed for use on frigates and other military vessels.

The Mark 13 is equipped to fire the RIM-66 Standard, RGM-84 Harpoon, and RIM-24 Tartar missiles for anti-air and anti-ship defense, and is capable of firing the Standard at a rate of one every eight seconds.[1] Its 40-round magazine consists of two concentric rings of vertically-stored missiles, 24 in the outer ring and 16 in the inner. In case of a fire, the system is equipped with magazine sprinkling, CO2 suppression and booster suppression.

Because of its distinctive single-armed design, the Mk 13 is often referred to as the "one-armed bandit."