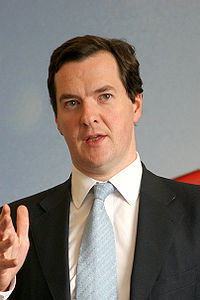 George Osborne, heir apparent to the Osborne Baronetcy of Ballentaylor and Ballylemon.

The Osborne Baronetcy, of Kiveton in the County of York, was created in the Baronetage of England on 13 July 1620. For more information on this creation, see the Duke of Leeds.

The Osborne, later Osborn Baronetcy, of Chicksands in the County of Bedford, was created in the Baronetage of England on 11 February 1662. For more information this creation, see Osborn Baronets.

The Osborne Baronetcy, of Ballentaylor in the County of Tipperary, and Ballylemon in the county of Wexford, was created in the Baronetage of Ireland on 15 October 1629 for Richard Osborne. The second and seventh Baronets both represented County Waterford in the Irish House of Commons, the eighth Baronet represented Carysfort while the ninth Baronet sat for Carysfort and Enniskillen. The current British Chancellor of the Exchequer George Osborne is the heir apparent to the baronetcy.