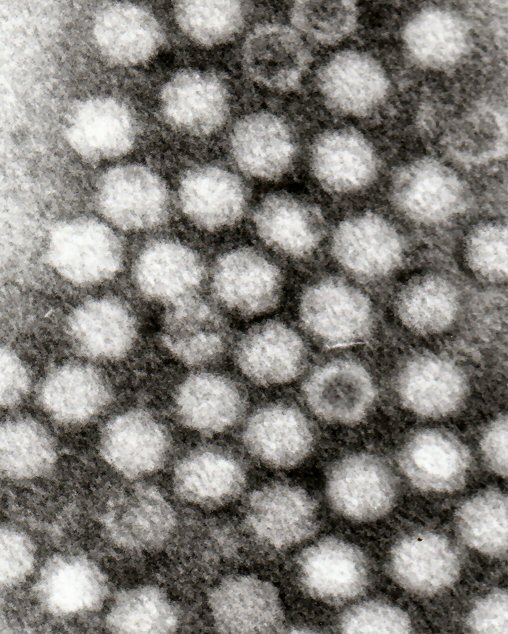 Adeno-associated virus (AAV) is a small which infects humans and some other primate species. AAV is not currently known to cause and consequently the virus causes a very mild . AAV can infect both dividing and non-dividing cells and may incorporate its into that of the host cell. These features make AAV a very attractive candidate for creating viral vectors for .

Wild-type AAV has attracted considerable interest from gene therapy researchers due to a number of features. Chief amongst these is the viruses' apparent lack of pathogenicity. It can also infect non-dividing cells and has the ability to stably integrate into the host cell genome at a specific site (designated AAVS1) in the human 19th .

Use of the virus does present some disadvantages. The cloning capacity of the vector is relatively limited and most therapeutic genes require the complete replacement of the virus's 4.8 kilobase genome. It is accordingly unclear if the site-specific integration can be preserved in a usable vector since it appears to be partially dependent on products of the Rep open reading frame. The humoral immunity instigated by infection with the wild type is thought to be a very common event. The associated neutralising activity limits the usefulness of the most commonly used serotype AAV2 in certain applications.

To date, AAV vectors have been used for first- and second-phase clinical trials for treatment of and first-phase trials for . Promising results have been obtained from phase I trials for , showing good tolerance of an AAV2 vector in the central nervous system. Other trials have begun, concerning AAV safety for treatment of , and late infantile .

Trials for the treatment of have reached phase III

AAV is not considered to have any known role in disease. It has been suggested to have a role in male

The AAV genome is built of single-stranded deoxyribonucleic acid (ss), either positive- or negative-sensed, which is about 4.7 kilobase long. The genome comprises inverted terminal repeats (ITRs) at both ends of the DNA strand, and two s (ORFs): "rep" and "cap". The former is composed of four overlapping genes encoding Rep proteins required for the AAV life cycle, and the latter contains overlapping nucleotide sequences of proteins: VP1, VP2 and VP3, which interact together to form a capsid of an icosahedral symmetry.

The Inverted Terminal Repeat (ITR) sequences comprise 145 bases each. They were named so because of their symmetry, which was shown to be required for efficient multiplication of the AAV genome.

With regard to gene therapy, ITRs seem to be the only sequences required "in cis" next to the therapeutic gene: structural ("cap") and packaging ("rep") genes can be delivered "in trans". With this assumption many methods were established for efficient production of recombinant AAV (rAAV) vectors containing a reporter or therapeutic gene. However, it was also published that the ITRs are not the only elements required "in cis" for the effective replication and encapsidation. A few research groups have identified a sequence designated "cis-acting Rep-dependent element" (CARE) inside the coding sequence of the "rep" gene. CARE was shown to augment the replication and encapsidation when present "in cis".

On the "left side" of the genome there are two s called p5 and p19, from which two overlapping messenger ribonucleic acids (s) of different length can be produced. Each of these contains an which can be either spliced out or not. Given these possibilities, four various mRNAs, and consequently four various Rep proteins with overlapping sequence can be synthesized. Their names depict their sizes in kilodaltons (kDa): Rep78, Rep68, Rep52 and Rep40.

The right side of a positive-sensed AAV genome encodes overlapping sequences of three capsid proteins, VP1, VP2 and VP3, which start from one promoter, designated p40. The molecular weights of these proteins are 87, 72 and 62 kiloDaltons, respectively.

Since the bigger intron is preferred to be spliced out, and since in the major splice the ACG codon is a much weaker initiation signal, the ratio at which the AAV structural proteins are synthesized "in vivo" is about 1:1:20, which is the same as in the mature virus particle.

The of the VP3 protein was determined by Xie, Bue, "et al".

Serotype 2 (AAV2) has been the most extensively examined so far.

Three cell receptors have been described for AAV2: heparan sulfate proteoglican (HSPG), aVβ5 and receptor 1 (FGFR-1). The first functions as a primary receptor, while the latter two have a co-receptor activity and enable AAV to enter the cell by receptor-mediated .

Studies have shown that serotype 2 of the virus (AAV-2) apparently kills cancer cells without harming healthy ones. "Our results suggest that adeno-associated virus type 2, which infects the majority of the population but has no known ill effects, kills multiple types of cancer cells yet has no effect on healthy cells," said [http://www.fred.psu.edu/ds/retrieve/fred/investigator/cmm10 Craig Meyers] , a professor of and at the College of Medicine in .

Although AAV2 is the most popular serotype in various AAV-based research, it has been shown that other serotypes can be more effective as gene delivery vectors. For instance AAV6 appears much better in infecting airway epithelial cells, AAV7 presents very high transduction rate of murine skeletal muscle cells (similarly to AAV1 and AAV5), AAV8 is superb in transducing hepatocytes

Serotypes can differ with the respect to the receptors they are bound to. For example AAV4 and AAV5 transduction can be inhibited by soluble s (of different form for each of these serotypes),

AAV is of particular interest to gene therapists due to its apparent limited capacity to induce immune responses in humans, a factor which should positively influence vector transduction efficiency while reducing the risk of any immune-associated .

The innate immune response to the AAV vectors has been characterised in animal models. Intravenous administration in mice causes transient production of pro-inflammatory cytokines and some infiltration of neutrophils and other leukocytes into the liver, which seems to sequester a large percentage of the injected viral particles. Both soluble factor levels and cell infiltration appear to return to baseline within six hours. By contrast, more aggressive viruses produce innate responses lasting 24 hours or longer.

The virus is known to instigate robust humoral immunity in animal models and in the human population where up to 80% of individuals are thought to be seropositive for AAV2. Antibodies are known to be neutralising and do impact on vector transduction efficiency via some routes of administration. As well as persistent AAV specific antibody levels, it appears from both prime-boost studies in animals and from clinical trials that the B-cell memory is also strong.

The cell-mediated response to the virus and to vectors is poorly characterised and has been largely ignored in the literature as recently as 2005.

There are several steps in the AAV infection cycle, from infecting a cell to producing new infectious particles:
# attachment to the
#
# endosomal trafficking
# escape from the late or
# translocation to the nucleus
# formation of double-stranded DNA replicative form of the AAV genome
# "rep" genes expression
# genome replication
# "cap" genes expression, synthesis of progeny ssDNA particles
# assembly of complete s, and
# release from the infected cell.

Some of these steps may look different in various types of cells, which, in part, contributes to the defined and quite limited native tropism of AAV. Replication of the virus can also vary in one cell type, depending on the cell's current phase.

The characteristic feature of the adeno-associated virus is a deficiency in replication and thus its inability to multiply in unaffected cells. The first factor that was described as providing successful generation of new AAV particles, was the , from which the AAV name originated. It was then shown that AAV replication can be facilitated by selected proteins derived from the adenovirus genome,

The minimal set of the adenoviral genes required for efficient generation of progeny AAV particles, was discovered by Matsushita, Ellinger "et al".