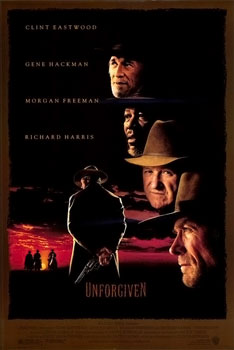 "Unforgiven" is a Western which was produced and directed by with the screenplay written by David Webb Peoples. The film tells the story of an aging and retired who takes on one more job years after he had hung up his guns and turned to farming. A dark Western that deals frankly with the uglier aspects of violence and the myth of the , it stars , , , Richard Harris, Jaimz Woolvett, and .

Eastwood dedicated the movie to former directors and mentors and . The film won four including Best Actor in a Supporting Role (Gene Hackman), Best Director, Best Film Editing and Best Picture. "Unforgiven" was inducted into the in 2004.

The film opens with an introductory crawl: "She was a comely young woman and not without prospects. Therefore it was heartbreaking to her mother that she would enter into marriage with William Munny, a known thief and murderer, a man of notoriously vicious and intemperate disposition. When she died, it was not at his hands as her mother might have expected, but of smallpox. That was 1878."

In [The film title states 1880 for the attack. The rest of the movie takes place in 1881 President 's 1881 assassination is discussed in the film, thus setting the year.] , in the town of Big Whiskey, a with the aid of a fellow cowboy slashes a 's face for laughing at his small penis. The venomous local sheriff and former gunfighter, Little Bill Daggett (), fines the cowboy and his friend seven ponies, payable to the prostitute's pimp and saloon owner Skinny. The other prostitutes, furious over the cowboys' lax punishments, conspire with each other to offer a $1000 reward [Equivalent to about $21,000 in the present day. http://www.measuringworth.com/ppowerus/] to anyone who kills the two. Miles away in Western , the Schofield Kid (Woolvett) approaches a farm owned by () and his two children, looking for a partner to do the hit. Munny, known in his youth as an infamous gunfighter, murderer and bandit, has since retired, having forsworn his criminal ways through the influence of his late wife. After initially declining the Kid's offer to join up and split the reward money, Munny reconsiders amidst his financial troubles and recruits a former associate and neighbor, Ned Logan (), as his partner before catching up with the Schofield Kid.

Back in Wyoming, English Bob () and his biographer W.W. Beauchamp () get off a train and ride into Big Whiskey. English Bob ignores the sign that prohibits the possession of firearms and blatantly lies to a deputy about the revolver he carries in plain sight. Following a quick shave, he emerges onto the barber's porch and is confronted by five armed deputies and Little Bill, who remembers Bob from his gunfighting days. After disarming the gunfighter, Little Bill ruthlessly beats him in front of the townspeople, shouting ominous warnings about pursuing the prostitute's bounty. Little Bill then ridicules and insults the jailed English Bob for the benefit of his biographer. Finally, Little Bill deports English Bob with a warning that he will kill him should he return. The humiliated and furious English Bob shouts and curses at the entire town and the American system as he is taken to the train station in a carriage.

After a long way through wet, frigid weather, Munny, Logan and the Kid enter a saloon for a drink and inquire about the reward. Feverish and sick after the long wet ride, Munny remains at a table while Logan and the Kid go upstairs to be serviced by the prostitutes. While Munny waits downstairs for his friends, Little Bill arrives and confronts him. A town ordinance prohibits guns &mdash; upon entering town that stormy night, Munny failed (or chose not) to see the warning sign posted alongside the road. Weak from his illness, Munny is in no condition to fight back as Little Bill brutally beats him in full view of the patrons. Munny manages to drag himself out of the saloon as Ned Logan and the Kid escape through a second-story window. The three partners retreat to a barn outside of town.Munny is nursed by his friends and the prostitutes, and after recovering sufficiently from his injuries, the three men ambush and kill one of the two s in a . It is at that point that Logan realizes he can no longer stomach murder, and decides to head home. Munny and the Kid find the other cowboy and Munny allows the eager Kid to shoot the man in an outside the isolated cabin where he had been holed up for safety.

Logan is captured and brought back to Little Bill, who beats all the information he can out of him, inadvertently killing Logan in the process. Logan's corpse is put on display in an open coffin outside the saloon as an example of frontier justice. Outside town, the Kid is shaken by the murder he has just committed and admits that it was his first kill; he renounces his planned gunfighting career. He tries to justify his guilt by claiming "Well, I guess he had it coming." "We all have it coming, Kid," returns Munny.

One of the prostitutes brings the reward money to Munny and tells him of the death of Logan. This enrages Munny who, breaking his vow of sobriety, drinks half a bottle of . In fear of Munny's reputation, the Kid attempts to refuse his share of the loot, to which Munny replies "I'm not gonna kill you Kid, you're the only friend I've got." The Kid gives his pistol to Munny who rides into town to confront the after giving the money to the Kid to deliver his and Logan's share to Logan's widow and Munny's children.

That night, Munny quietly walks into the crowded Greeley's Saloon. Inside the saloon, Little Bill has assembled a posse to pursue Munny and the Kid. Munny demands to see the saloon's owner while holding them all at bay with a . When Skinny, the owner, identifies himself, Munny shoots him with one of the two barrels. Little Bill curses Munny, as he states that Skinny was unarmed, but Munny retorts that he did it because Skinny had decorated the saloon with Logan's body.

Munny trains the other chamber of the shotgun on Little Bill, but the gun misfires and Little Bill commands the others to shoot Munny. A gun fight ensues where Munny pulls out a pistol and kills three posse members outright, and seriously wounds Little Bill and another deputy. Munny has a short encounter with Little Bill's erstwhile biographer, who is scared witless, yet amazed and admiring of Munny's cool dispatch of 5 armed men. Beauchamp leaves having finally, after false starts with English Bob and Little Bill, found the real western anti-hero he has sought to document in his penny . Munny hears Little Bill cocking his pistol. Munny steps on Little Bill's hand and points Ned's rifle directly into his face. Little Bill realizes what is to follow and begs for mercy, but Munny shoots Little Bill dead. Munny heads to the door, shooting the last injured deputy without bothering to aim. After shouting threats of wanton violence through the open door to anyone who might be outside waiting for him, he leaves the saloon and rides away on a gray horse, unmolested by the frightened townspeople, who recoil in fear, glad to see him ride out (with the possible exception of the disfigured prostitute, who watches Munny leave with something approaching gratitude and/or compassion).

The film ends with an epilogue that echoes its introduction: "Some years later, Mrs. Ansonia Feathers made the arduous journey to Hodgeman County, Kansas to visit the last resting place of her only daughter. William Munny had long since disappeared with the children... some said to San Francisco where it was rumored he prospered in dry goods. And there was nothing on the marker to explain to Mrs. Feathers why her only daughter had married a known thief and murderer, a man of notoriously vicious and intemperate disposition."

Critical response was very positive. The film makes an appearance in the 's 100 years, 100 movies. In , Time.com named it one of the 100 best movies of the last 80 years. In addition, the film is 'Certified Fresh' by rottentomatoes.com, with a 96% approval rating among reviews. Many critics acclaimed the film for its noir-ish moral ambiguity and atmosphere. [http://www.montrealfilmjournal.com/review.asp?R=R0000575] They also acclaimed it as a fitting to the western genre. It was also admitted to the , and is one of the few westerns in the registry.

"Unforgiven" has several allusions to earlier Westerns. The opening scene, where Eastwood stands at the grave of his dead wife, is an allusion to 's "".

The scene in which Hackman tells Rubinek to pick up the revolver in the jail is an allusion to "", which has a similar scene in a bar, which again was itself an allusion to the film "Shane".

Rubinek then asks Eastwood how he chose the order in which to kill five men, stating that Little Bill had explained to him that an experienced gunfighter always aimed for the best shot in his opponents first, when facing multiple opponents. Eastwood responds, "Is that right? I was lucky in the order...but I've always been lucky when it comes to killing folks". This is an allusion to "", in which Eastwood's character instantaneously ranks his four simultaneous opponents by reading their faces in the manner of a poker player, similar to what Hackman had told Rubinek an experienced fighter should do.

Another allusion to "" is shown at the beginning of the film, when William Munny is practising with his old revolver attempting (and failing) to hit a tin can placed on a fencepost for target practice. While in "Wales", Eastwood's character manages to hit a similar fencepost several dozen times in one session of practice, Munny gives up shooting after repeatively missing the can, and, in frustration, takes a shotgun out of his home and blasts the can to pieces. Finally, the scene in the jail, in which Hackman's character is discussing how the most important attribute of a gunfighter is coolness under pressure rather than speed and accuracy (noting that it is difficult to be quick and accurate when an opponent is returning fire), mirrors the backyard shooting practice scene in "", in which 's character says essentially the same thing to a young .Fact|date=April 2007