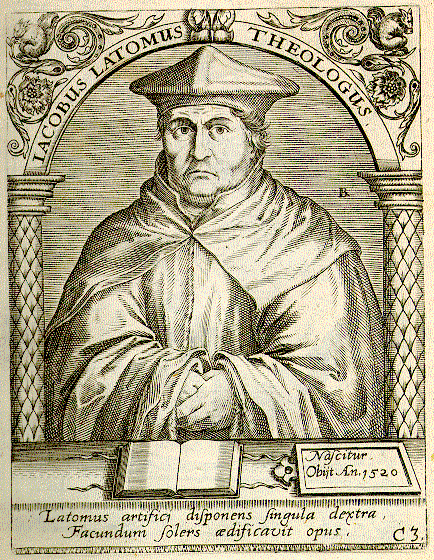 Jacobus Latomus (or Jacques Masson) (ca. 1475, - , ) [cite web | last = Ratnikas | first = Algis | title = Timeline Belgium | work = Timelines of History | url = http://timelines.ws/countries/BELGIUM.HTML | accessdate =2008-02-20] [Juhász, 320.] was a Flemish theologian, a distinguished member of the Faculty of Theology at the . Latomus was a theological adviser to the , and his exchange with is particularly noted. The general focus of his academic work centered on refuting and the , defending the divine right of the papacy and the hierarchy of the Roman Catholic Church. [Smolinsky, par. 1.]

Latomus completed his studies in at the , where he obtained a in theology in 1519. In the same year, he began teaching theology in Leuven, becoming a full professor in 1535. Having risen to the post of dean of the Faculty of Theology, he became of the University of Leuven in 1537. [Smolinsky, par. 1.]

His first work was published in 1519, a criticism of Biblical language studies at the Collège des Trois Langues in Leuven, as well as work against , which initiated a long-standing literary dispute between Erasmus and Latomus. Other writings included criticism of , a defense of the theologians of Leuven, and arguments against and . [Smolinsky, par. 1.]

Nicholas Crane has described Latomus as a "tiny, chilling, man with thin lips, dark, bagged eyes and a limp". [Crane, 77.] Erasmus referred to his opponent's limp, assigning him the "Hephestion", a reference to the crippled metal-smith of . [Crane, 77.]

Latomus was a canon of and was a prominent voice against Erasmus for twenty years. He was also an experienced inquisitor; [Wilkinson, par. 2.] indeed, he has been labeled "the greatest heresy-hunter in Europe" among his contemporaries. [Daniell, 154.] Despite his fearsome academic reputation, his responses to William Tyndale were both precise and courteous. [Daniell, 154.] 

While in prison for charges relating to his translation of the into English, was questioned by Latomus, whose task was to determine that Tyndale's views were heretical and that he would not abandon them. [Juhász, 320.] It is possible that Tyndale's charge of heresy was determined long before the exchange, and that the sole goal of Latomus's examination was to bring Tyndale back to before he was burned at the stake. [Daniell, 155.]

Tyndale set out his views in writing, and Latomus answered them; Tyndale in turn produced a book in two parts as a reply, a work which is now lost. [Juhász, 320.] At Tyndale's request, Latomus countered the two parts of this book in two different writings. Latomus's replies, along with his first letter, were collected by his nephew into a work called "Refutations against Tyndale" (1550), which included an introduction by Livinus Crucius, the parish priest of the Flemish village of . [Juhász, 320.] Latomus clearly intended these works to edify, not as a solely personal academic exchange. [Juhász, 320.]

Latomus's works are important, as they have allowed a credible reconstruction of Tyndale's views; it is also apparent that Latomus either did not know of Tyndale's translation of the Bible or did not think it worth mentioning - evincing that the precise charge brought against Tyndale at the time was not translating the Bible, but the heresy of . [Juhász, 321.]