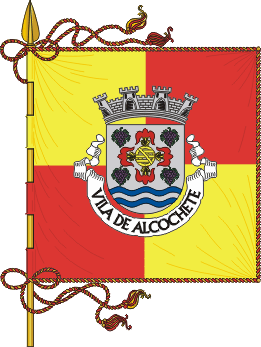 Alcochete (pron. IPA2|aɫku'ʃet(ɨ)) is a municipality in with a total area of 129.0 and a total population of 14,347 inhabitants. The municipality is composed of 3 parishes and is located in the district of Setúbal. Alcochete is the site of Sporting's academy.

The present mayor is Luís Franco, elected by the .

The municipal holiday is .

The largest in the is just outside town. Alcochete is known for its bullfighting tradition and its proximity to the longest bridge in , the .

The actual site of today Alcochete was already occupied during Roman times with a production facility. It's name is thought to derive from the word for oven for reasons not yet understood. It became a vacation site preferred by the portuguese royalty and the future king D. Manuel I was born in the village. It has experienced major development due to the construction of the Vasco da Gama bridge.

On , Portuguese prime minister announced that Alcochete has been selected as the site of the new serving , Portugal's capital. [ [http://www.forbes.com/markets/feeds/afx/2008/01/10/afx4516319.html Portugal's new Lisbon airport to be built in Alcochete for 4.9 bln eur - PM] from online, ] The existing , which is located within the city of itself, has become too small to handle demand. This preliminary decision will be finalised after public consultation. The location of Alcochete as the construction site of the future Lisbon Airport was confirmed by the Portuguese Government on , [ [http://www.portugal.gov.pt/Portal/PT/Governos/Governos_Constitucionais/GC17/Conselho_de_Ministros/Comunicados_e_Conferencias_de_Imprensa/20080508.htm Portal do Governo ] ] .