Christine Rowland Beatty (born May 1970) served as the Chief of Staff from 2002 to 2008 to Detroit Mayor Kwame Kilpatrick.

In January 2008, Beatty resigned amid an emerging political-sex scandal and criminal charges of perjury related to a whistleblower trial for lying under oath about their extramarital affair and that they sought to mislead jurors when they testified that they did not fire Deputy Police Chief Gary Brown. Kilpatrick has already pleaded guilty September 4, 2008, to two felony obstruction of justice charges, and was sentenced to four months in jail on October 28, 2008. She was offered several plea bargains from Wayne County Prosecutor Kym Worthy--one for as little as 150 days of prison time—but she has refused.[1] Beatty was a respondent in a $25,000 settled slander lawsuit initiated by two other police officers.

Beatty, who was born Christine L. Rowland, graduated from Cass Tech High School and was voted its "most-popular student" in 1988 and was a Majorette.[2] She graduated with a bachelor's degree from Howard University and a master's degree from Wayne State University.[3]

She married Lou Beatty and they have two children. The marriage ended in divorce in 2006. Beatty recently has suspended her status as a student of Wayne State University Law School as a condition of her probation. [1]

Beatty was named in a slander lawsuit, along with Kwame Kilpatrick and police chief Ella Bully-Cummings, brought about by two police officers that claimed to have been slandered in the media by the trio.[4]

The lawsuit stems from a 2004 incident in which the two police officers pulled Beatty over for speeding. Beatty was irate at being stopped and bluntly asked the officers, "Do you know who the fuck I am?" when the officers came to the vehicle.[4] While stopped, Beatty called Police Chief Bully-Cummings to have the officers called off, which the officers allege they were ordered to do. When reports of the incident started to surface in the media, Beatty, Kilpatrick and Bully-Cummings all claimed that the traffic stop was some type of "set-up" to harass Beatty.[5]

The parties in the law suit entered into mediation which recommended a settlement of $25,000 which was rejected twice by the Detroit City Council.[6]

The attorney for the officers said "The mayor has been exposed and I may want more money for my clients now," after it was revealed through text messages that Kilpatrick and Beatty were involved in a sexual relationship that both denied under oath.[5]

The lawsuit was settled for $25,000 and the attorney for the officers said of the officers,"They don’t want to be embroiled in this whole [text messaging] scandal."[6] 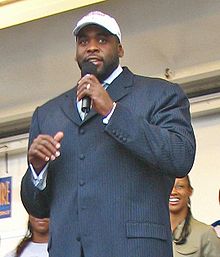 In January 2008, The Detroit Free Press examined more than 14,000 text messages exchanged between Beatty and Kilpatrick on their city issued SkyTel pagers between September–October 2002 and April–May 2003. The dates are of importance because they encompass the time periods of the alleged Manoogian Mansion party and the ouster of Gary Brown respectively.[7]

Beatty and Kilpatrick, both married to other people at the time, did discuss city business. However, many of the series of messages described not a professional relationship but an extramarital sexual relationship between the two, often in graphic detail. The text messages further described their use of city funds to arrange romantic getaways, their fears of being caught by the mayor's police protection unit, and evidence the pair conspired to fire Detroit Deputy Police Chief Gary Brown.[7]

In an August 2007 trial, Kilpatrick and Beatty both denied that they had a sexual relationship or that they fired Brown while under oath.

Beatty resigned as mayoral chief of staff stating "I believe that it is clear I can no longer effectively carry out the duties of chief of staff."[2] She did not indicate if she would resign from her position of the Detroit Medical Center board of directors.[8]

Wayne County Prosecutor Kym Worthy began an investigation of perjury charges after the Detroit Free Press revealed the existence of text messages which supported allegations that Kilpatrick and Beatty lied under oath about an extramarital affair during a lawsuit brought by Detroit police officers.[9]

The investigation ended with Beatty being charged with seven felonies consisting of perjury, conspiracy to obstruct justice, misconduct in office and obstruction of justice. The charges carry a maximum sentence of five to fifteen years in prison.[9]

On December 1, 2008, Beatty admitted lying under oath and was sentenced to 120 days in jail. She will also be on probation for five years and, during that time, will have to reimburse the city of Detroit $100,000, if she is capable of doing so. On January 6, 2009, she began her sentence at the Wayne County Jail.[10]