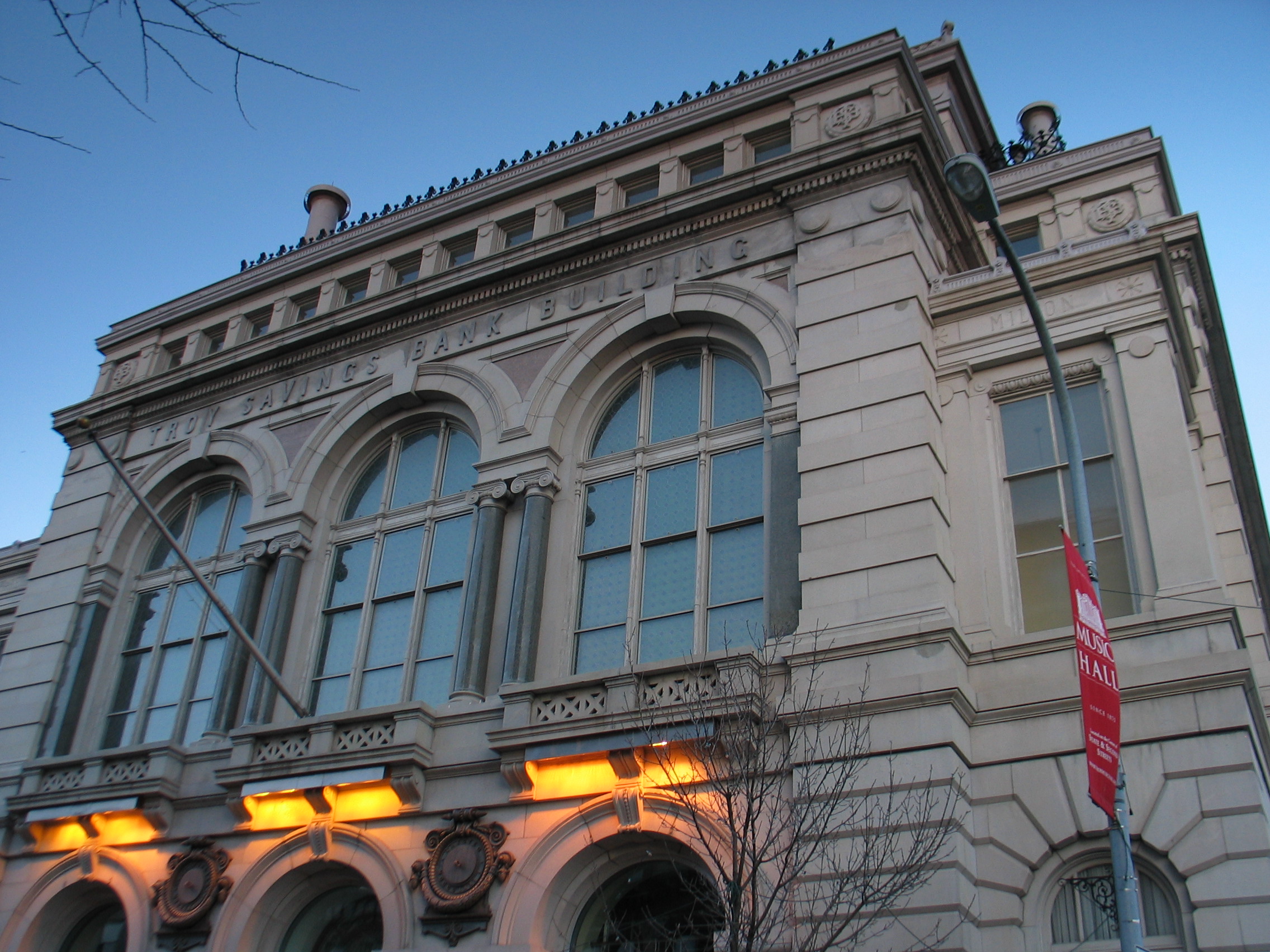 It is notable for having a constructed on the second floor above the bank itself (the Troy Savings Bank Music Hall), which is renowned for its , including a huge Odell .

History of the bank and music hall

In the early years of the 20th century the Music Hall featured performances from artists such as , , , , , and . In the 1930s and 1940s, artists including , and played there. It was a usual stop for a musician on a tour around America.

Apparently not up to modern , there was long a tradition that prior to each performance the would come out on stage and announce "There is absolutely no smoking in the Hall. If you have to smoke, you can hit the streets at half time."

Following , Troy's wealth declined and thus so did the bank's. Many public initiatives were begun to save the bank (and thus the music hall) from closure. Ideas included establishing a Museum of Industrial and Folk Art downstairs and renting the Hall itself to the area's many colleges. In 1989 the building was declared a .,

History of the Odell Opus 190 Organ

The organ at the Troy Savings Bank Music Hall was built in 1882 as Opus 190 of J. H. & C. S. Odell of , and originally installed in the home of financier William Belden. The original purchase price of the instrument was $12,470. The Troy Savings Bank purchased the organ from Mr. Belden in 1889 and the instrument was installed in the Music Hall during the months of August through October, 1890. The first notes from the Odell Opus 190 in the Hall were heard on October 20, 1890. The organ was maintained in usable condition until the 1960s, at which point it fell into disrepair.

In early 2006, an effort was mounted to restore the organ after decades of neglect. Under the impetus of the and under the direction of organ builder S.L Huntington & Co. of Stonington, Connecticut, a crew of volunteers worked over the course of several weeks to restore the organ to playable condition. The instrument was featured during the Organ Historical Society's 2006 convention.

In 1979, the Troy Savings Bank Music Hall Revitalization Committee was founded by private citizens. With the bank's support and additional funding from the city and county for its administration, the Troy Savings Bank Music Hall Corporation was founded. A organization which still leases the Hall from the bank, it began its ownership with a performance by the Benny Goodman Band in 1980.