The Cook, the Thief, His Wife & Her Lover

The Cook, the Thief, His Wife & Her Lover

Infobox Film
name = The Cook, the Thief, His Wife & Her Lover 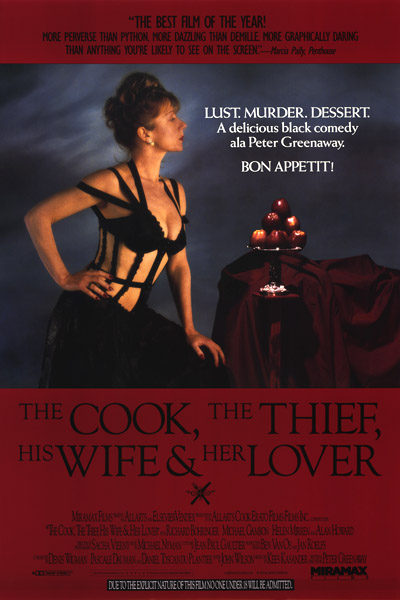 The titular characters all come together at the lavishly realized Hollandaise Restaurant. Crime lord Albert Spica (Michael Gambon) takes over a high class restaurant run by a French chef (Richard Bohringer) and populates it with his criminal underlings. As Spica continues to abuse his power and goes on tirade after tirade between rounds of abusing the restaurant's staff and patrons, his wife (Helen Mirren) begins a secretive affair with a silent, well read man (Alan Howard) who is a regular at La Hollandaise. Their affair goes on in the presence of many of the knowing restaurant staff.

Spica is eventually made aware of this and goes about tracking down and enacting a horrible revenge on the couple in a series of impressively staged and imaginatively grotesque scenes leading up to the ultimate in just "desserts".

* The Thief, Albert Spica (played by Gambon), is a violent gangster and part-owner of La Hollandaise, a restaurant which he and his circle of cronies, including his mother (Smith) and his favorite crony to insult (Roth), visit in the evenings. Although Spica has pretensions to be a , he is in fact coarse in his tastes and ignorant about , and is also violent and insulting towards the other guests.
* The Cook, Richard Borst (played by Bohringer), is Spica's head . He despises Spica, but also fears him and is obliged to stay.
* The Wife, Georgina Spica (played by Mirren), is regularly abused by her husband Albert, terrified of him, and has tried to escape but is routinely found and brought back to his mansion.
* The Lover, Michael (played by Howard), is one of the other guests in La Hollandaise. While dining one evening, Georgina begins to take an interest in him, and begins an with him, eventually in the kitchen of La Hollandaise with Richard's collusion.

designed the costumes, and wrote the score, which prominently incorporated his 1985 composition, "Memorial". created the prop food.

The film's original running time was 124 minutes. Due to the content, the gave Miramax a choice of either an X rating or go unrated (adults only) for theatrical release. Unrated was chosen in lieu of the X rating being more associated with pornographic films. Two versions of the film were released on in the 1990s. One was an R-rated cut running 95 minutes (mainly for large video store chains); the other was the original version.

"The Cook The Thief His Wife & Her Lover" is the twelfth album release by and the ninth to feature the . The album includes the first commercially released recording of "Memorial".

There is some music in the film that is not included on the soundtrack album: the love theme for Michael and Georgina, which is "Fish Beach" from "", the song performed as a show in the restuarant, or a doubly-pulsed variation of "Memorial" that occurs about halfway through the film. Edits of "Memorial" appear throughout the film, with the entire twelve minute movement accompanying the final scene and end credits, but one variation is uniquely created for the film.