The Hand of Fear

The Hand of Fear

] [cite web
url= http://www.shannonsullivan.com/drwho/serials/4n.html
title= The Hand of Fear
publisher = A Brief History of Time Travel
last = Sullivan
first = Shannon
date = 2007-08-07
accessdate = 2008-08-30]
*Working titles claimed for this story were "The Hand of Death" and "The Hand of Time". However, the production notes on the DVD release state that there were no working titles for this story.
*At the time, in terms of seasons, Elisabeth Sladen was the longest serving companion with any Doctor, appearing for over three seasons and surpassing 's record as . Sladen held the record until played for three years and one month. as companion holds the record for the longest serving companion in terms of the number of episodes he appeared in.
*When Sladen expressed her intention to leave the series, Sarah was originally supposed to be killed off in a pseudo-historical story involving aliens and the Foreign Legion. However , who was supposed to write the scripts, was unable to do so, much to Sladen's relief, as she did not want Sarah to be killed off or married off. Sladen also asked that Sarah's departure not be the main focus of the story, as she felt the program was about the Doctor, not the companion.
*A real-life quarry explosion was filmed for the episode. Unfortunately the crew badly underestimated the power of the explosion, and a rumour persisted for many years that a camera was totally destroyed in the blast. However, in the DVD commentary it is made clear that this is just a fan myth.
*The nuclear power station was originally supposed to be the Nuton Power Complex of "" but was renamed the Nunton Experimental Complex instead. The real-life location was the in .
*In the original script, Miss Jackson was a nameless male. Director Lennie Mayne built up the part, changed the gender, and cast his wife, Frances Pidgeon.
*Eldrad's home was originally supposed to be the black hole of Omega 4.6. When Robert Holmes pointed out to Bob Baker and Dave Martin that the name Omega had already appeared in "Doctor Who" (in "The Three Doctors"; ironically this story was also written by Baker and Martin), they changed the name to Kastria.
*The original script for the story featured an ageing Brigadier Lethbridge Stewart, who had been moved from UNIT to the Extraterrestrial Xenological Intelligence Taskforce to study UFO activities. He was to be killed when he steered his spaceship into an Omegan ship to prevent that ship from crashing into Earth. This plan did not go through due to being unavailable for filming. The original script also featured Harry Sullivan.
*Baker and Martin intentionally did not write Sarah's departure scene. The script for that scene was rewritten by Sladen and from Robert Holmes' original version.
*In the final scene, Sarah Jane whistles the tune "Daddy Wouldn't Buy Me a Bow-Wow". Since Sladen is unable to whistle, director Lennie Mayne provided the whistling while she mimed to it.Fact|date=August 2008 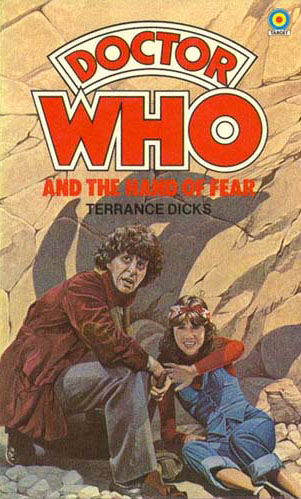