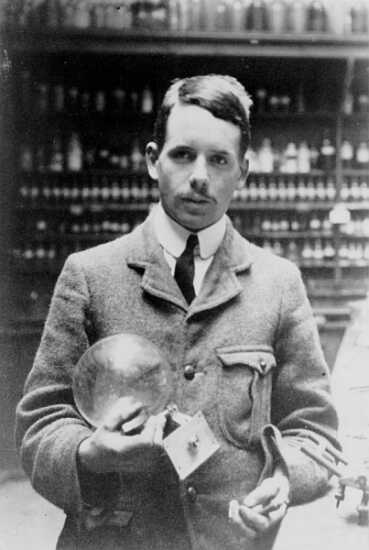 Henry Gwyn Jeffreys Moseley (, – , ) was an English physicist. His main contributions to were the quantitative justification of the previously empirical concept of , and . This law advanced by immediately sorting the elements of the periodic table in a more logical order . It also advanced basic physics by providing independent support for the of the Rutherford/ nuclear atom containing positive equal to atomic number.

In 1913, by using spectra obtained by in s, he found a systematic relation between and atomic number, . Previous to this, atomic numbers or elemental numbers had been thought of as a semi-arbitrary sequential ordering-number, based on sequence of es, but altered when necessary (for example, by ) to put an element in the appropriate place in the . For example, and had been assigned atomic numbers of 27 and 28, respectively, based on their chemical properties, since they have nearly identical atomic mass (in fact, cobalt's atomic mass is larger than nickel's, which would have reversed them had they been placed in the periodic table strictly according to this criterion). Moseley's experiments were able to show directly that cobalt and nickel have clearly differing atomic numbers of 27 and 28, and are correctly placed in the periodic table by an objective measure. Moseley's discovery thus showed that atomic numbers were not arbitrary, but have an experimentally measurable basis.

In addition, Moseley showed that there were gaps in the atomic number sequence at numbers 43, 61, 72, and 75. These spaces are now known, respectively, to be the places of the radioactive very rare elements and , and the last two discovered naturally-occurring stable elements (discovered 1923) and (discovered 1925). None were known in Moseley's time. Mendeleev had previously predicted technetium, and had previously predicted promethium; Moseley confirmed their predictions, predicted the two additional undiscovered elements, and argued that there were no other gaps in the periodic table between aluminum and gold.

This last matter had been an issue, particularly with the rare earths. Moseley was able to demonstratethat the series of rare-earth elements, i.e. through inclusive, must have 15 members -- no more and no less. The number of lanthanoids was an issue very far from being settled by the chemistry of that time, which could not yet provide pure samples of all the rare earth salts, and in some cases was chemically unable to tell mixtures of two very similar elements from pure materials. Moseley's instrument was able to sort out these problems, some of which had occupied chemists for years, almost immediately. He predicted the existence of element 61, a lanthanoid whose existence was previously unsuspected.(Many years later element 61 i.e. was created artificially.) [ [http://portal.acs.org/portal/acs/corg/content?_nfpb=true&_pageLabel=PP_ARTICLEMAIN&node_id=925&content_id=CTP_004295&use_sec=true&sec_url_var=region1 American Chemical Society, "Separation of Rare Earth Elements"] ]

In 1914, Moseley resigned at Manchester to return to Oxford to pursue his research, but when broke out, he turned down a job offer and enlisted in the . He fought at Gallipoli, where he was killed in action by a sniper in 1915, shot through the head while in the act of telephoning an order. Many speculated that he should have won the , but was unable to because it is only awarded to the living. It is speculated that because of Moseley's death in the War that the British and other world governments began a policy of no longer allowing their scientists to enlist for combat.

Only twenty-seven years old at death, Moseley could in many scientists' opinions have contributed much to the knowledge of atomic structure had he lived. As once said in 1962, "You see actually the Rutherford work [the nuclear atom] was not taken seriously. We cannot understand today, but it was not taken seriously at all. There was no mention of it any place. The great change came from Moseley."

Contribution to our understanding

Previous to Moseley and his law, atomic numbers had been thought of as a semi-arbitrary ordering number, vaguely increasing with atomic weight but not strictly defined by it. Moseley's discovery showed that atomic numbers were not arbitrary but have a physical basis. He redefined the idea of atomic numbers from its previous status as an around-about approximate numerical tag to help sorting, i.e. in the periodic table, into a real and objective whole-number quantity which was experimentally directly measurable. Furthermore, as noted by Bohr, provided a reasonably complete experimental set of data supporting the (at that time new from 1911) / concept of the atom, in which atomic number is understood as representing physically exactly the number of positive charges (s) in a central atomic nucleus (Moseley mentions these two scientists in his paper, but does not actually mention Bohr). A simple modification of Rydberg and Bohr's formula was found to give Moseley's empirically-derived law for measurement of atomic number.

Use of X-ray spectrometer

X-ray spectrometers as Moseley knew them worked as follows: A glass-bulb electron tube similar to that held by Moseley in the photo above, was used. Inside the evacuated tube, electrons were fired at a substance (i.e. a sample of pure element in Moseley's work), causing of a core electron. Decay of the core hole then led to emission of x-rays which were led out of the tube in a semi-beam, through an opening in the external X-ray shielding, then diffracted by a standard salt crystal, with angular results read out as lines by exposure of an X-ray film plate fixed outside the vacuum tube, at a known distance. Application of (after a guess at the mean distance between atoms in a crystal, based on density) then allowed the wavelength and thus frequency of the emitted x-rays to be determined. Moseley participated in the design and development of early X-ray specrometry equipment, learning some techniques from Sir W.H. Bragg at Leeds, and developing others himself. Many techniques were copied from principles used with light spectrometers, by substituting crystals, ionization chambers and photographic plates for the analogous equipment. In some cases Moseley was forced to modify the equipment to detect particularly soft X-rays which would not penetrate air and paper, by working with completely evacuated equipment, and in the dark.