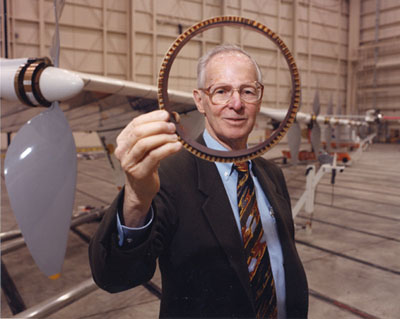 Paul B. MacCready, Jr. (, - , ) was an American . He was the founder of and the inventor of the first practical flying machine powered by a human being. He devoted his life to developing more efficient transportation vehicles that could "Do more with less".

Born in to a medical family, MacCready was an inventor from an early age and won a national contest building a model flying machine at the age of 15.

He started after World War II and was a three-time winner (1948, 1949, 1953) of the , awarded annually to the U.S. National Open Class Soaring Champion. In 1956 he became the first American pilot to become the World Soaring Champion. He devised the MacCready Theory on the correct a depending on conditions and based on the glider's rate of sink at different air-speeds. Glider pilots still use the "MacCready speed ring".

With Dr. Peter B.S. Lissaman he created the first practical human-powered aircraft, the "", and thereby won the in 1977. The award-winning plane was built out of piano wire, bicycle parts, and . In 1979, he built its successor, the "", which won the second Kremer prize for successfully flying from to .

He later created ed aircraft such as the "" and the "". He was involved in the development of NASA's solar-powered flying wings such as the Helios, which surpassed the 's altitude records and could theoretically fly on Mars (where the atmosphere is thin and has little oxygen). MacCready also collaborated with General Motors on the design of the , a solar powered car, and then on the electric car.

MacCready helped to sponsor the Nissan Dempsey/MacCready Prize which has helped to motivate developments in racing-bicycle technology, applying aerodynamics and new materials to allow for faster human-powered vehicles.

He was the founder (in 1971) and Chairman of Inc., a public company (AVAV) that develops unmanned surveillance aircraft and advance power systems. AV recently flew the first airplane powered by hydrogen fuel cells, the Global Observer.