The Owens Valley Solar Array (OVSA) is a astronomical radio telescope array with main interests in studying the physics of the Sun. The instruments of the observatory are designed and employed specifically for studying the activities and phenomena of our solar system's sun. Other solar dedicated instruments operated on the site include the Solar Radio Burst Locator (SRBL), the FASR Subsystem Testbed (FST), and the Korean SRBL (KSRBL). The OVSA is operated by the New Jersey Institute of Technology (NJIT), which also operates the Big Bear Solar Observatory.

About the radio telescope array

The array was originally built by the California Institute of Technology in 1982, and comprised 5 antennas (two 27-m antennas and three 1.8-m antennas) by 1997. Management of the observatory was transferred to NJIT in 1997, and two more 1.8-m antennas were added by 2004. Funding comes from the National Science Foundation and NASA.

The two 27 meter (90-foot) antennas were built in 1958, originally to study radio galaxies. 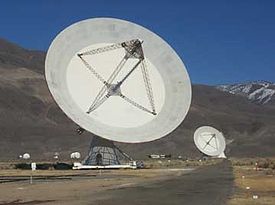 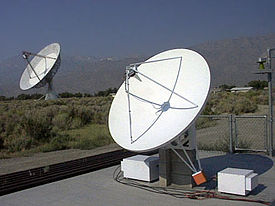 The array employs two 27-m antennas and five 1.8-m antennas to perform radio interferometry at up to 86 radio frequencies ranging from 1 to 18 gigahertz (microwave range). The combination of spatial and spectral resolution is called microwave imaging spectroscopy, which provides rich diagnostic information about the Sun. It is sensitive to both thermal radiation from the chromosphere and corona of the Sun, and to non-thermal radiation from high-energy electrons accelerated in solar flares.

The array has also been used in the discovery and study of the effects of solar radio bursts on wireless communication systems, including cell phones and the Global Positioning System (GPS). Such effects are aspects of Space weather.