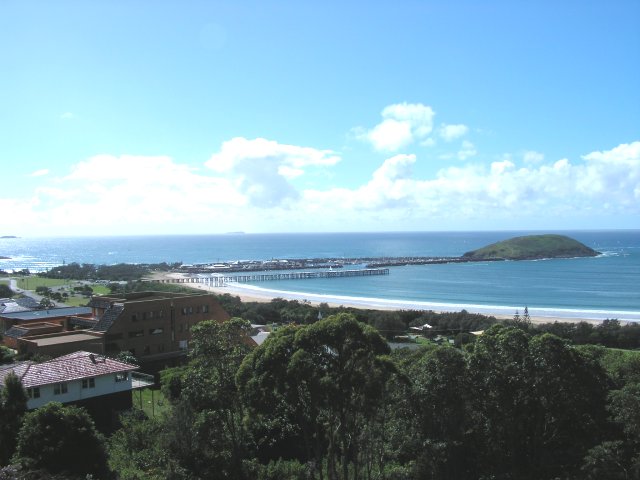 Coffs Harbour is a coastal city located on the north coast of about 570 km north of and 350 km south of . The region has a population of nearly 70,000 that swells to over 100,000 in the holiday season. Popular with people wanting to relocate from big cities to small towns on the coast or in rural areas, Coffs Harbour continues to grow at an exceptional rate, with a population projection of 80,014 by the year 2016. According to the CSIRO, Coffs Harbour has the most livable climate in Australia and is nestled between a high mountain backdrop and dozens of unspoiled beaches. Coffs Harbour's economy is based mainly on farming (of bananas), tourism, and manufacturing. [http://www.coffsharbour.nsw.gov.au/www/html/1990-economic-profile.asp] The town has a university (), a hospital, [http://www.ncahs.nsw.gov.au/services/results_detailed.php?serviceid=517] several radio stations, and three major shopping centres. Coffs Harbour is near numerous s, including a marine national park.There are multiple flights per day by , by , and by from Coffs Harbour to Sydney, Brisbane, and . Coffs Harbour is also accessible by road, by trains, and by regular bus services.

The city is surrounded by outlying towns that have established themselves and are often referred to as suburbs of the Coffs Coast Region:
* Bellingen
* Coramba
* Nana Glen
* Corindi/Red Rock
* Dorrigo
* Sawtell (Including Toormina and East Boambee)
* Woolgoolga

Sawtell, 10 km south along Hogbin Drive from the city has become a little brother town, where it was often regarded as a suburb of the city.

Coffs Harbour is also one of many regional cities along the Pacific Highway between Newcastle and The Gold Coast.The city's close proximity to the centre of the mid and north coasts makes it a comfortable drive from either end of the highway. Some of the regional cities that scatter the highway include Tweed Heads, Ballina, Grafton, Kempsey, Port Macquarie and Taree.

The surrounding region is dominated by coastal s and s with hinterland hills and mountains covered by , s, and other s. It is the only place in New South Wales where the meets the .

By the early 1900s, the Coffs Harbour area had become an important timber production centre. Before the opening of the North Coast Railway Line, the only way to transport large items of heavy but low value, such as timber, was by coastal shipping. This meant sawmillers on the North Coast were dependent on jetties either in rivers or off beaches for exporting their timber. Timber tramways were constructed to connect the timber-getting areas, the sawmills and jetties built into the ocean at Coffs Harbour ["The Timber Tramways of Coffs Harbour" Longworth, Jim , June, 2006 pp214-223] .

Coffs Harbour owes its name to John Korff, who named the area "Korff's Harbour" when he was forced to take shelter from storm in the area in 1847. Its name was accidentally changed by the surveyor for the crown when he reserved land in the area during 1861.

Coffs Harbour is the hub for a thriving banana industry. One of the biggest attractions is the , the first of (it celebrated its 40th Birthday in 2005), with the World's Largest Banana celebrating the region's best known export. There is also a popular underwater spot on a small natural .

The Coffs Harbour Jetty is an historically important timber wharf where coastal shipping once moved the timber from the hinterland. The Jetty area is the subject of current planning by Council and consultants to develop a cultural precinct and rejuvenated residential area.

Nearby the Solitary Islands Marine Park preserves a diverse underwater ecosystem that mirrors the terrestrial biodiversity, covering the southern limit of northern tropical species and the northern limits of the southern temperate species. Directly out to from Coffs Harbour adjacent to the man-made breakwater is Muttonbird Island. The island is a nature reserve protecting a significant breeding site.

The town's water supply comes from the nearby at Cochranes Pool and the city hosts the Coffs Harbour Regional Botanic Garden.

Although the Pacific Highway cuts through the centre of the city, much attention has recently been focused on obtaining state government commitment to determining the routes of proposed highway deviations at a number of places including Bonville, the North Boambee Valley to the west of Coffs Harbour and north of Arrawarra to Wells Crossing.

*2CS FM 106.3 – Converted from AM 639. Macquarie Southern Cross Radio network shows from Hobart, Gold Coast and Albury; the rest of the time it is an "Adult Hits" station. The station takes the Charles Wooley Across Australia program from Hobart.
*Star FM 105.5/105.1 – Hot AC station that is networked. Commenced in 1997 as a third commercial license for the Coffs Coast.
*2HC 639 AM – Music, news, talk format. Part of the Broadcast Operations Group's Super Network continuously relaying programs from in Sydney except for the Steve Price Morning Show from between 9am and 11am which comes from . The station was purchased by Bill Caralis in 2005.

Services all combine to do a less frequent weekend run. See www.sawtellcoaches.com.au for more information.

Coffs Harbour Regional Airport is the local airport serving the region, and is regularly serviced by Qantas, Virgin Blue, and . The passenger terminal is accessible via Hogbin Drive.

The Coffs Harbour Aero Club on Aviation Drive supports private pilots, but there is currently no instructor to train new pilots fact|date=April 2008.

The city is home to the , which has hosted FIFA World Cup Qualifiers and a Women's 2008 Beijing Olympics Qualification fixtures for the Matildas in Football as well as some Pre-Season fixtures and Domestic One Day matches.