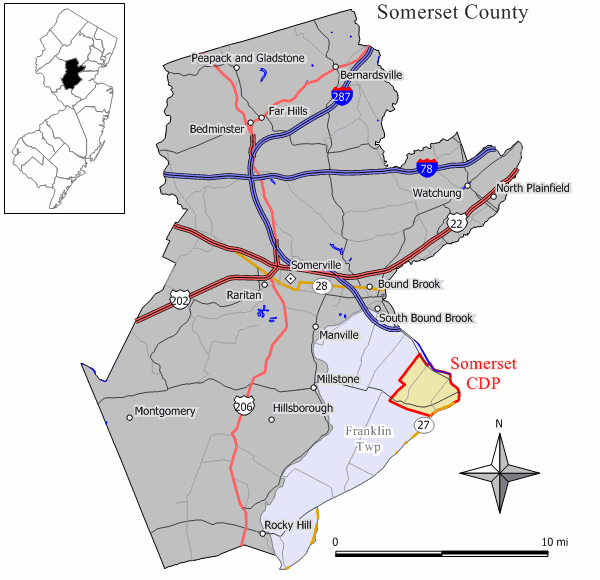 Somerset is a and unincorporated area located at the eastermost section within Franklin Township, in Somerset County, . As of the , the CDP population was 23,040. Somerset housed one of the first in the United States [cite news |first= |last= |authorlink= |coauthors= |title= If You're Thinking of Living In/Somerset, N.J. Diversity, Stability and Convenience. |url=http://query.nytimes.com/gst/fullpage.html?res=9405E1DD133AF933A15756C0A9679C8B63&sec=&spon=&pagewanted=3 |quote=In 1913, the Marconi Wireless Telegraph Company built a giant radio transmission station in Somerset and suspended a milelong antenna from a series of 440-foot-high steel masts along the canal route. In 1918, President Woodrow Wilson used the station to broadcast an appeal to Germany's Kaiser Wilhelm II to abdicate, an address that historians credit with hastening the armistice. The station has since been dismantled. However the Guglielmo Marconi Memorial Plaza, on the corner of Easton Avenue and John F. Kennedy Boulevard, has been dedicated to the inventor. |publisher= |date=, |accessdate=2008-06-16 ] [ http://query.nytimes.com/mem/archive-free/pdf?_r=1&res=9A0CE1DE143EE733A25750C0A9619C946596D6CF&oref=slogin ] .

There were 8,238 households out of which 31.2% had children under the age of 18 living with them, 52.6% were married couples living together, 12.9% had a female householder with no husband present, and 29.6% were non-families. 22.8% of all households were made up of individuals and 6.8% had someone living alone who was 65 years of age or older. The average household size was 2.78 and the average family size was 3.29.

[http://www.infoage.org/wanb-1914.html | New Brunswick Marconi Station] (40.51529° N 74.48895° W) was located at JFK Boulevard and Easton Avenue just a few minutes from the New Brunswick border. Today it is the site of Marconi Park. It was an early radio transmitter facility built in 1913 and operated by the . After the partial failure of transatlantic telegraph cables, the facility was confiscated by the on [http://earlyradiohistory.us/1963hw20.htm#20sec1| April 7, 1917] to provide transatlantic communications during World War I. The New Brunswick Naval Radio Station was the principal wartime communication link between the United States and Europe, using the callsign NFF. President Woodrow Wilson's Fourteen Points speech was transmitted from the site in 1918. After the war, ownership of the station, along with Marconi's other US assets, were transferred from the Navy to RCA. The antenna masts were demolished in 1952 to make room for what is now a small mall containing a Kmart, but the buildings on the other side of JFK Boulevard were spared. All but one of the brick buildings were demolished around 2004 to make way for a storage locker facility. The bricks and tiles were saved for use in any future restoration of the spared building, and the Marconi facility in .

The station used a huge 5000 foot long antenna supported by eight 400 foot steel masts, similar to the AT&T long wave telephone transmitter at RCA's Rocky Point, Long Island transmitter facility. During World War I the original Marconi spark transmitter was replaced with an Alexanderson alternator, the invention of the famous General Electric engineer, with an output power of 200 kilowatts and looking like an ordinary power station generator. Its frequency was around 17 kHz, which made its wavelength around 17,500 meters.