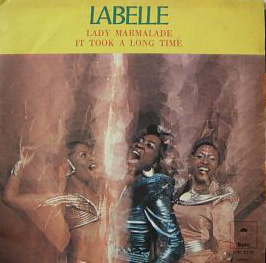 "Lady Marmalade" is a 1974 song written by , who co-wrote many of the hits recorded by , and by . The songwriting pair had previously collaborated on the hit song "". was recorded by for ' Epic label, becoming a number-one hit the next year. An early hit, the song is most famous for its sexually suggestive chorus of "voulez-vous coucher avec moi (ce soir)?"

The song held the number-one spot on the "Billboard" Hot 100 singles chart in the for one week, from to , , replacing "My Eyes Adored You" by and replaced by "Lovin' You" by . Labelle's version of "Lady Marmalade" was inducted into the Grammy Hall of Fame in . [ [http://www.grammy.com/Recording_Academy/Awards/Hall_Of_Fame/#l Grammy Hall of Fame] ]

The song is set in the of , and is about a named Lady Marmalade. The refrain is her invitation (in French) to potential customers: "Would you like to sleep with me (tonight)?". "Voulez-vous?", a formal way of asking "Would you like to?", indicates that she's making this offer to strangers, not a boyfriend (the informal form being "Veux-tu?").

Although the song gave way to many cover versions over the years, the most successful was recorded twenty-six years later by singers , , , and Pink as a single for the "" film . Their version was a number-one hit on the "Billboard" Hot 100 in the U.S. for five weeks, from to . The "Moulin Rouge!" version of "Lady Marmalade" was also a number-one hit in the and , introducing the song to a whole new generation of music listeners, and brought the song's infamous catchphrase back into mainstream culture. The song is ranked the 479th greatest song of all time by .

"Lady Marmalade," written by and after Crewe made first-hand observations in New Orleans, Louisiana, was first recorded by Labelle lead singer , accompanied by backing from her bandmates and and tells the story of a woman known only as "Lady Marmalade", who seduces a man she met on the street in New Orleans, . Although the man has moved on from the experience, when he tries to sleep his memories of their tryst remain vivid. The song's chorus "Voulez-vous coucher avec moi (ce soir)?" means "Do you want to sleep with me (tonight)?" in French, and is an unsubtle invitation for . The same line appeared previously in the play "A Streetcar Named Desire", coming from the promiscuous .

"Lady Marmalade" was first recorded by the relatively obscure group Eleventh Hour (of which songwriter Nolan was a member) in 1974 on "Eleventh Hour's Greatest Hits" LP, but Labelle's producer decided to record it as the main track of the album "", which became highly successful. The record was produced by Toussaint, with instrumental backing from .

"Lady Marmalade" was a number-one hit for one week on the "Billboard" Hot 100 singles chart in the United States during the early spring of 1975, and charted at number-one for one week on the "Billboard" Top Soul Singles chart. The single also charted at number seventeen in the United Kingdom. "Lady Marmalade" replaced another Crewe/Nolan composition, Frankie Valli's "My Eyes Adored You", as the "Billboard" Hot 100 number-one single. This made Crewe and Nolan the third songwriting team in "Billboard" history (after and ) to replace themselves at number-one. [Bronson, Fred (2003, 5th ed.). "The Billboard Book of Number One Hits." New York: Billboard Books. ISBN 0-8230-7677-6]

The single's disco success inspired Labelle to adopted a more eclectic, -based image for their next album, "Phoenix". However, the group never had another top forty hit after "Lady Marmalade", and broke up in 1976. Patti LaBelle went on to have a successful solo career on another CBS Records-owned label, . Also in 1975, recorded a French version that became very popular in Canada (Quebec).

The song was first covered by on her 1991 album "Sex Cymbal" in a -oriented rendition, with horns as the centerpiece. In 1995 disco cover band Boogie Knights covered "Lady Marmalade", fronted by singer . In 1999, the song was covered by the techno act as a bonus track on their remix album "Expand Your Head". The song is not part of the official track listing on the CD itself, however. made a second French version of the song.

More recently, the track has featured in the TV series "Angel", performed by actor , and was released on in 2005.The Labelle version appears in several films, including "", "Dick", and "Jacob's Ladder".

Improbably, the lyrics of "Lady Marmalade" were sung to the tune of the Toreador Song from Carmen by Tim Brooke-Taylor on the radio comedy panel-game show, "I'm Sorry I Haven't a Clue" as part of a round called "One Song to the Tune of Another".

It was featured on the video game .The game has a version performed with Patti Labelle. 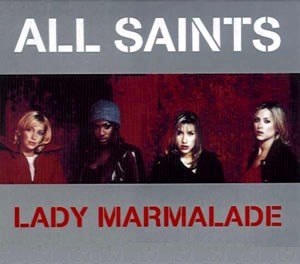 In 1998 the song was covered by the English female pop group All Saints as part of the d single "Under the Bridge"/"Lady Marmalade", which reached number one on the official UK Top 40. The All Saints' version contains different lyrics for its verses; the only lyrics retained from the original composition are those for the chorus.Under the Bridge" / "Lady Marmalade" was the third single released from the All Saints debut album, All Saints. It became their second number-one single in the UK.

A total of 424,799 singles have been sold in the UK. The songs were covers of "Lady Marmalade" by Labelle and "Under the Bridge" by respectively and the single was released as a double A-side. The proceeds from the single went to breast cancer charities.

The version appeared on the "" soundtrack. In Europe, a "Lady Marmalade"-only single was released.