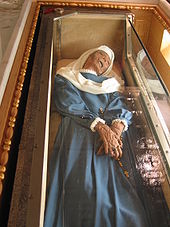 The body of Saint Virginia Centurione, found to be incorrupt by the Catholic Church.

Incorruptibility is a Roman Catholic and Eastern Orthodox believe that supernatural (or Godly) intervention allows some human bodies (specifically saints) to avoid the normal process of decomposition after death as a sign of their holiness. Bodies that reportedly undergo little or no decomposition, or delayed decomposition, are sometimes referred to as incorrupt or incorruptible.

Although incorruptibility is still recognised as supernatural in Roman Catholicism, it is no longer counted as a miracle in the recognition of a saint.[1][clarification needed]

Incorruptibility is seen as distinct from the good preservation of a body, or mummification. Incorruptible bodies are often said to have the odour of sanctity, exuding a sweet or floral, pleasant aroma.

In Roman Catholicism, if a body remains incorruptible after death, this is generally seen as a sign that the individual is a saint, although not every saint is expected to have an incorruptible corpse.

When the Catholic Church recognized incorruptibles, a body was not deemed incorruptible if it had undergone an embalming. As such, although the body of Pope John XXIII remains in a remarkably intact state, after its exhumation, Church officials quickly pointed out that the Pope's body had been embalmed and that there was a lack of oxygen in his sealed triple coffin.

Incorrupt relics of Anthony, John, and Eustathios at the Orthodox Church of the Holy Spirit in Vilnius, Lithuania.

To the Eastern Orthodox Church, Incorruptibility continues to be an important element for the process of glorification. An important distinction is made between natural mummification and what is believed to be supernatural incorruptibility. There are a great number of eastern Orthodox saints whose bodies have been found to be incorrupt and are in much veneration among the faithful. These include:

Alternatively, bodies may simply have been embalmed, which greatly decreases the rate at which they decompose.[3]

The argument for a spiritual cause may include a belief that the pious nature of the individual in some way permeated the flesh (a metaphysical cause having a physical effect), or a belief that decomposition was prevented by the intervention of God, or some other supernatural agent, as the body will be resurrected later.[citation needed]

The saints and other Christian holy men and women whose bodies are said to be or to have been incorrupt have been catalogued in The Incorruptibles: A Study of the Incorruption of the Bodies of Various Catholic Saints and Beati a 1977 book by Joan Carroll Cruz.[4] Claimed incorruptibles include: 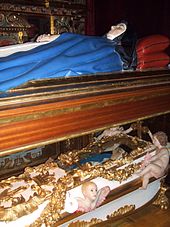