Daniel Barry (July 11, 1923 – January 25, 1997) was an American cartoonist. Beginning in comic books during the 1940s with Leonard Starr, Stan Drake and his brother Sy Barry, he helped define and exemplify a particular kind of "New York Slick" style which dominated comics until the Marvel Revolution brought attention to the Jack Kirby style. This style was characterized by careful attention to lines and the clear delineation of textures. 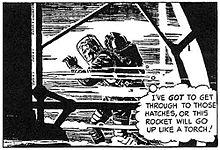 From 1947-48 he drew the Tarzan daily strip, then in 1951 revived the Flash Gordon daily strip. At different times science fiction writers Harry Harrison and Julian May both contributed scripts to the series. In addition, at various times during his tenure, he was assisted in his artwork by a number of artists including Bob Fujitani, Fred Kida, Frank Frazetta. When artist Mac Raboy died in 1967, Barry assumed responsibility of the Flash Gordon Sunday strip also. He created the official poster for the 1980 movie version of Flash Gordon. After moving to Cleveland GA, he was assisted in his work by artist Gail Becket. In 1990, he left Flash Gordon altogether, when the syndicate, King Features asked him to take a cut in pay.

His last work was for Dark Horse Comics, where he wrote and drew many Indiana Jones and Predator comic books.

Dan Barry's brother, Sy Barry, was an artist on The Phantom.