This article deals with the Spanish Order of knighthood. For the Portuguese Order, see Order of St. James of the Sword.

The Order of Santiago (Galician: Orde de Santiago, Spanish: Orden de Santiago) was founded in the 12th century, and owes its name to the national patron of Galicia and Spain, Santiago (St. James the Greater), under whose banner the Christians of Galicia and Asturias began in the 9th century to combat and drive back the Muslims of the Iberian Peninsula. 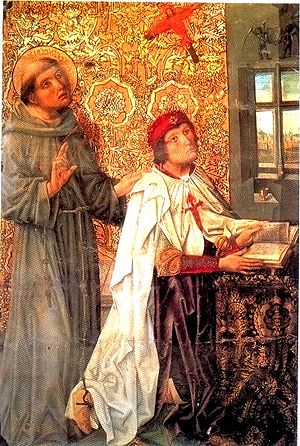 Álvaro de Luna y Jarana (between 1388 and 1390; June 2, 1453), Constable of Castile, Grand Master of the military order of Santiago , and favorite of King John II of Castile.

Santiago de Compostela, in Galicia, the centre of devotion to this Apostle, is neither the cradle nor the principal seat of the order. Two cities contend for the honour of having given it birth, León in the kingdom of that name, and Uclés in Castile. At that time (1157–1230) the royal dynasty was divided into two rival branches, which rivalry tended to obscure the beginnings of the order. The Knights of Santiago had possessions in each of the kingdoms, but Ferdinand II of León and Alfonso VIII of Castile, in bestowing them, set the condition that the seat of the order should be in their respective states. Hence arose long disputes which only ended in 1230 when Ferdinand III, the Saint, united both crowns. Thenceforth, Uclés, in Cuenca Province, was regarded as the headquarters of the order; there the grand master habitually resided, aspirants passed their year of probation, and the rich archives of the order were preserved until united in 1869 with the "Archivo Histórico Nacional" of Madrid. The order received its first rule in 1171 from Cardinal Jacinto (later Pope Celestine III), then legate in Iberia of Pope Alexander III. 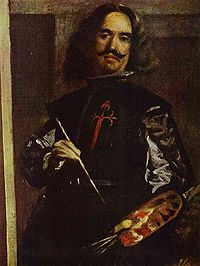 Self-portrait of Diego Velázquez with the order cross that he was awarded in 1659. Legend has that the king himself painted the cross over the 1656 picture.

Unlike the contemporary orders of Calatrava and Alcántara, which followed the severe rule of the Benedictines of Cîteaux, Santiago adopted the milder rule of the Canons of St. Augustine. In fact at León they offered their services to the Canons Regular of Saint Eligius in that town for the protection of pilgrims to the shrine of St. James and the hospices on the roads leading to Compostela. This explains the mixed character of their order, which is hospitaller and military, like that of St. John of Jerusalem. They were recognized as religious by Pope Alexander III, whose Bull of 5 July 1175, was subsequently confirmed by more than twenty of his successors. These pontifical acts, collected in the Bullarium of the order, secured them all the privileges and exemptions of other monastic orders. The order comprised several affiliated classes: canons, charged with the administration of the sacraments; canonesses, occupied with the service of pilgrims; religious knights living in community, and married knights. The right to marry, which other military orders only obtained at the end of the Middle Ages, was accorded them from the beginning under certain conditions, such as the authorization of the king, the obligation of observing continence during Advent, Lent, and on certain festivals of the year, which they spent at their monasteries in retreat.

The mildness of this rule furthered the rapid spread of the order, which eclipsed the older orders of Calatrava and Alcántara, and whose power was reputed abroad even before 1200. The first Bull of confirmation, that of Pope Alexander III, already enumerated a large number of endowments. At its height Santiago alone had more possessions than Calatrava and Alcántara together. In Spain these possessions included 83 commanderies, of which 3 were reserved to the grand commanders, 2 cities, 178 boroughs and villages, 200 parishes, 5 hospitals, 5 convents, and 1 college at Salamanca. The number of knights was then 400 and they could muster more than 1000 lances. They had possessions in Portugal, France, Italy, Hungary, and even Palestine. Abrantes, their first commandery in Portugal, dates from the reign of Afonso I in 1172, and soon became a distinct order which Pope Nicholas IV in 1290 released from the jurisdiction of Uclés.

Their military history is linked with that of the Iberian states. They assisted in driving out the Muslims, doing battle with them sometimes separately, sometimes with the royal armies. They also had a regrettable share in the fatal dissensions which disturbed the Christians of Iberia and brought about more than one schism in the order. Finally they took part in the maritime expeditions against the Muslims. Thus arose the obligation imposed upon aspirants to serve six months in the galleys, which obligation still existed in the eighteenth century, but from which exemption was easily purchased. Authority was exercised by a grand master assisted by a Council of Thirteen, which elected the grand master and had the right to depose him for due cause; they had supreme jurisdiction in all disputes between members of the order. The first grand master, Pedro Fernández de Fuente Encalato, died in 1184. He had had 39 successors, among them several Spanish Infantes, when, in 1499, Ferdinand the Catholic induced the pope to assign to him the administration of the order. Under Charles V, Pope Adrian VI annexed to the crown of Spain the three great military orders (Alcántara, Calatrava, and Santiago) with hereditary transmission even in the female line (1522). Thenceforth the three orders were united under one government, though their titles and possessions remained separate. To discharge the detail of this administration, Charles V instituted a special ministry, the Council of Orders, composed of a president named by the king, whom he represented, and six knights, two delegates from each order. To this council belonged the presentation of knights to vacant commanderies and jurisdiction in all matters, civil or ecclesiastical, save the purely spiritual cases reserved for ecclesiastical dignitaries. Thus ended the autonomy of the orders, but not their prestige. 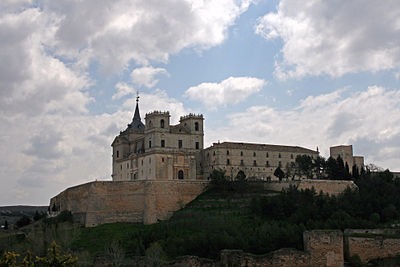 Uclés Monastery, parent and headquarters of the order, Cuenca Province.

Today the Order of Santiago still exists under the Spanish crown. Currently there are 35 knights and 30 novices in the order. Admission to the order is determined if the applicant has noble ancestry. Until 1653 nobility was checked by looking at only the paternal grandparents' family history. Changes have been made so that maternal grandparents are included in verifying noble ancestry. Other qualification to join the order is that the applicant must be a practicing Catholic, were of legitimate birth including parents and grandparents, and that they are not descended from non-Christians.[1] As of 1655 some of the new duties of the order is to defend the belief of the Immaculate Conception of Mary.[2]

Their symbol was a cross of Saint James, a red cross terminating in a sword (cross fleury fitchy in heraldry), which recalls their title de la Espada, and a shell (la venera), which they doubtless owed to their connection with the pilgrimage of St. James.