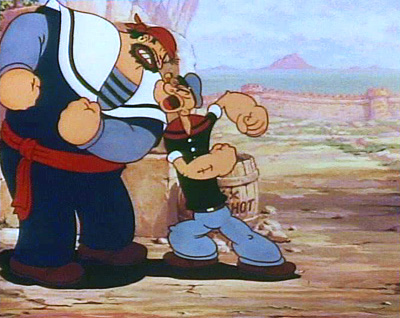 
"Popeye the Sailor Meets Sindbad the Sailor" is a two-reel in the "Popeye Color Feature" series, produced in and released to theatres on by . It was produced by for , Inc. and directed by , with musical supervision by . The voice of Popeye is performed by , with as and as .

In this short, Sindbad the Sailor (modeled after ) proclaims himself the greatest in the world and "the most remarkable, extraordinary fellow," a claim which is challenged by Popeye's arrival on his island with Olive Oyl and in tow. Sindbad orders his huge Roc, Rokh, to kidnap Popeye's girlfriend, Olive Oyl, and challenges the one-eyed sailor to a series of obstacles to prove his greatness, including fighting Rokh, a two-headed giant named Boola, and Sindbad himself. Popeye makes short work of the bird and the giant, but Sindbad almost gets the best of him until Popeye produces his can of , which gives him the power to soundly defeat Sindbad and proclaim himself "the most remarkable, extraordinary fella."

A subtly dark running gag features Wimpy chasing after a on the island with a , intending to grind the duck's flesh so that he can fry it into a . Many of the scenes in this short feature use of the Fleischer's Tabletop process, which used modeled sets to create 3D backgrounds for the cartoon.

This short was the first of the three "Popeye" Color Specials, which were, at over sixteen minutes each, three times as long as a regular "Popeye" cartoon, and were often billed in theatres alongside or above the main feature. "Popeye the Sailor Meets Sindbad the Sailor" was nominated for the , which it lost to 's "" "The Country Cousin". Footage from this short was later used in the 1952 "Popeye" cartoon "Big Bad Sindbad", in which Popeye relates the story of his encounter with Sindbad to his four nephews.

Today, this short and the other two "Popeye Color Specials", "", and "" are in the , and are widely available on and . A fully restored version with the original Paramount mountain logo opening and closing titles is available on the "" DVD set from Warner Bros.

"Popeye the Sailor Meets Sindbad the Sailor" has been deemed "culturally significant" by the United States and selected for preservation in the . In 1994, the film was voted #17 of the of all time by members of the animation field.

* [http://www.archive.org/details/Popeye_meetsSinbadtheSailor "Popeye the Sailor Meets Sinbad the Sailor"] at the
* [http://myeggnests50cartoons.ning.com Watch the 50 Greatest Cartoons]