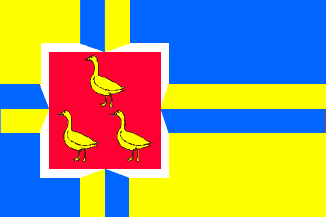 . It consists of a former island, also named Wieringen, and there are plans to make Wieringen an island again by widening the Amsteldiepkanaal into a lake called the Wieringerrandmeer.

The municipality of Wieringen consists of the following cities, towns, villages and/or districts: Dam, , , , , , , , Oosterland, , Stroe, , and Westerland.

The landscape of Wieringen is not all flat: it is characterised by dam ramparts of , which were formed during the Saale . The name Wieringen has nothing to do with "wier"( in Dutch), but this connection was often made in former days. Probably the name came from "wîr" = "height".

The first known references to Wieringen is as "Wiron" or "pagus Wirense" in in a [http://www.pagowirense.nl/english/wr-his2c.htm list of property] owned by the at , dated late 8th century or early 9th century AD. In that list, the entries that mention Wieringen are:-

:"Ego Gerwic de Fresia trado sancto Bonifacio ad Fuldense monasterium terram iuris mei iuxta fluvium Maresdeop et quicquid proprietatis habui sive in agris vel pratis, silvis, domibus vel mancipiis." = "I, Gerwic of , transfer to St. of the of the land that is under my jurisdiction near the river , and all I had in possession either fields or meadows, forests, houses or serfs.".

::It describes the as "fluvium Maresdeop": "fluvium" is for "river"; it seems that in that time and were much bigger and spread across what is now the western end of the and perhaps also other areas which are now sea or have been re-empoldered since. Wieringen and Texel may have met as opposite banks of the Maresdeop (which name may mean "morass deep"), which was then an ordinary river with banks of permanent land (but perhaps a large river, as it is called a "deep").

:"Ego Geltrud tradidi ad monasterium sancti Bonifacii omnem proprietatem meam in agris, silvis et de pratis ad XX carradas feni, in loco nuncupato Wictulfingafurt in pago Wironi." = "I, Geltrud, have transferred to the monastery of St. all my property in fields, forests and from the meadows to [= "enough land to produce"?] 20 cart-loads of , in the place named Wictulfingafurt, in the area Wieringen ...". Wictulfingafurt means "the ford of the sons or people of a man called Wictulf".

:"Ego in Dei nomine Isanbalt et uxor mea Sigibirn de Fresia tradimus ad sanctum Bonifacium in villa que dicitur Brochenlar, in pago Wirah, quicquid proprietatis habuimus, hoc est de terra arabili quantum XI modus conseri potest." = "In God's name I, Isanbalt and my wife Sigibirn from , transfer to St. Bonifacius in the manor which is named Brochenlar, in the area [named] Wieringen, all we had in property, that is of land as much as can be sowed with 11 measures [of seed] .".

::The places Wictulfingafurt and Brochenlar cannot now be found, and their sites are likeliest now under the sea, or under some which has been made since.

:"Ego Hunbertus tradidi ad sanctum Bonifacium quicquid mihi in regione Frésionum in pago Wirah mei reliquere parentes in hereditatem, cunctamque meam possessionem, hoc est in terris, agris, pratis, pascuis, silvis, aquis, domibus ac familiis." = "I, Hunbertus, have transferred to St. Bonifacius whatever in the region of the in the area Wieringen my parents left me in inheritance, and my complete possessions, that it in fields, meadows, grassland, forests, waters, dwellings, and all the families [= "inhabitants of that estate"] ".

:A possessions list of the St. Martin's church in Utrecht, dated 948, lists a church domain with 12 farms at "Alvitlo" (= De Elft), and 72 [probably mostly small] farms at "Strude" (= Stroe). Both these places still exist and are in Wieringen.

:The amount of property in land in these two lists, would need an area much bigger than the modern (up to the 1930's) island of Wieringen.

was found in 1996 in a pasture at the hamlet of , showing that Wieringen in the 9th century was for a short time an operating base of s. The treasure is approx. 1.7 kilograms of silver coins and jewels and small silver ingots. It now can be seen in the in Leiden. Some years later were found smaller silver treasures from the same period which confirmed the picture. Wieringen became an island around 1200 as a result of successive storm floods.

In 1924 Wieringen stopped being an island, because on 31 July 1924 the was closed by a short dam called the Amsteldiepdijk. In 1930 the Eastern Wieringermeerdijk was completed in the Zuiderzee, and with it the adjacent polder the . The closing of the Zuiderzee was completed in 1932 by the , a large dike which links Wieringen with Friesland. This dike starts at .

Soon after these changes Wieringen became an exile refuge for the German crown prince Wilhelm. He with his father Wilhelm II fled in November 1918 from Flanders to the Netherlands and got political asylum. On 22 November 1918 he arrived on the island, and he left 10 November 1923 to Germany. In the meantime at the blacksmithy in he learned how to forge s.

The municipal council of Wieringen consists of 13 seats, which are divided as follows: