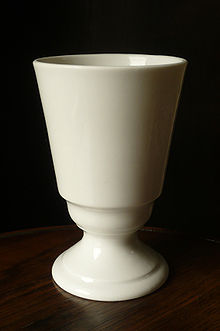 Mazagran is a kind of drinkware usually used for coffee, which is named after a town of Mazagran in Algeria.

A battle took place there in 1840 between French soldiers and Algerians and the legend says that during the night, the 123 besieged French soldiers drank coffee laced with brandy . It is a glass or cup on a foot, optionally also with a handle and a short stem. Mazagrans can be made of terracotta, porcelain or glass.[1]

Coffee drinks (for example: coffee with ice) served in mazagran are sometimes also named mazagran. Mazagran was a name of a failed carbonated coffee soda beverage developed as a collaboration between Starbucks and Pepsi in the mid-1990s[2][3].