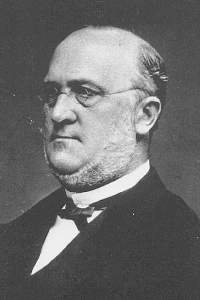 Adolph Wilhelm Hermann Kolbe (, &ndash; , ) was a German . He never used the first two of his given names, preferring to be known simply as Hermann Kolbe.

Kolbe was born in Elliehausen, near , () as the eldest son of a Protestant pastor. At the age of 13 he entered the Göttingen Gymnasium, residing at the home of one of the professors. He obtained the leaving certificate (the ) six years later. He had become passionate about the study of chemistry, matriculating at the in the spring of 1838 in order to study with the famous chemist .

In 1842 he became an assistant to at the ; he took his doctoral degree there in 1843. A new opportunity arose in 1845, when he became assistant to Lyon Playfair at the new in London, where he became a close friend of . From 1847 he was engaged in editing the "Handwörterbuch der reinen und angewandten Chemie" ("Dictionary of Pure and Applied Chemistry") edited by , Wöhler, and , and he also wrote an important textbook. In 1851 Kolbe succeeded Bunsen as professor of chemistry at Marburg, and in 1865 he was called to the University of .

In 1853 he married Charlotte, the daughter of General-Major Wilhelm von Bardeleben. His wife died in 1876 after 23 years of happy marriage. They had four children.

As late as the 1840s, and despite Friedrich Wöhler's synthesis of urea in 1828, some chemists still believed in the doctrine of , according to which a special life-force was necessary to create organic compounds. Kolbe developed the idea that s could be derived from inorganic ones, directly or indirectly, by substitution processes. He validated his theory by converting , in several steps, to (1843-45). Introducing a modified idea of structural radicals, he contributed to the establishment of . One of the more dramatic successes of his theory was his prediction of the existence of secondary and tertiary s, a conjecture that was soon confirmed by the synthesis of these substances.

Hermann Kolbe was the first person to use the word synthesis in the present day meaning.

With he found that s can be hydrolyzed to the corresponding acids.

As editor of the "Journal für praktische Chemie" ("Journal of practical chemistry", from 1870 to 1884), Kolbe was sometimes so severely critical of the work of others, especially after about 1874, that some wondered whether he might have been suffering a mental illness. He was intolerant of what he regarded as loose speculation parading as theory, and sought through his writings to save his beloved science of chemistry from what he regarded as the scourge of modern structural theory.

His rejection of structural chemistry, especially the theories of the structure of benzene by , the theory of the asymmetric carbon atom by J.H. van't Hoff, and the reform of chemical nomenclature by , resulted in vituperative articles in the "Journal für Praktische Chemie". Some translated quotes illustrate his manner of articulating the deep conflict between his interpretation of chemistry and that of the structural chemists: "...Baeyer is an excellent experimentor, but he is only an empiricist, lacking sense and capability, and his interpretations of his experiments show particular deficiency in his familiarity with the principles of true science..." [cite journal
title = Begründung meiner Urtheile über Ad. Baeyer's wissenschaftliche Qualification
author = Hermann Kolbe
journal = Journal für Praktische Chemie
volume = 26
issue = 1
year = 1882
pages = 308–323
doi = 10.1002/prac.18820260121 ]

The violence of his language worked unfairly to limit his posthumous reputation. He died of a heart attack, in .