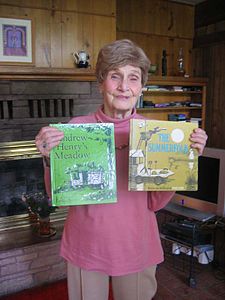 Doris Burn at her home in Guemes Island, WA

Doris "Doe" Wernstedt Burn (April 24, 1923 – March 9, 2011[1]) was an American children's book author and illustrator. She lived most of her life on Waldron Island in the San Juan Islands archipelago of Washington. Her book illustrations, mostly done between 1965 and 1971, consist of absorbingly detailed line drawings, often of children matter-of-factly doing extraordinary things.

Burn was born in Portland, Oregon to explorer, mountaineer and United States Forest Service worker Lage Wernstedt and his wife Adele. The family resided on Guemes Island near Anacortes. After being interviewed by June Burn for the Bellingham Herald, Mr. Wernstedt and his family became friends of the Burns and built a summer cabin near theirs on Waldron, a small island without ferry service.[1]

Burn attended the University of Oregon and the University of Hawaii, and graduated from the University of Washington. She married South (Bob) Burn after World War II and the couple made their home on Waldron Island[1]. She had four children, whom she taught for one year on Guemes Island's one-room schoolhouse. Burn separated from her husband, but they remained lifelong friends and neighbors.

Burn worked on her meticulous illustrations in the evenings, in "a small cabin where she spends the day at work after chopping enough wood to keep the fire going through the day, hauling two buckets of water from the pump for washing brushes and pens and brewing 'a perpetual pot of tea'"[2]. Waldron Island was without electricity, telephone service, running water or merchants. All of her goods and supplies were brought by boat from the mainland.

In 1956 Burn took a portfolio of illustrations to publishers in New York and was encouraged to continue working. Her children remember her working late nights by lantern-light with the fireplace burning down to embers.[1]

Burn's oldest son, Mark, was the inspiration for her first book, Andrew Henry's Meadow (1965), the story of a boy who, ignored by his family, builds a retreat for himself in a nearby meadow. He is soon joined by other children for whom he also builds houses, tailored to their interests and hobbies. Andrew Henry's Meadow won the Washington Governor's Art Award and was a Weekly Reader book club selection. It was reissued in a 40th anniversary edition by San Juan Publishing in 2005. She went on to write two other works, The Summerfolk and The Tale of Lazy Lizard Canyon, and illustrated eight others. 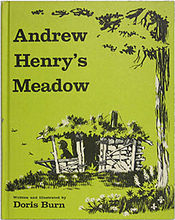 Actor Zach Braff has been adapting Andrew Henry's Meadow into a film for Twentieth Century Fox since 2004.[3] Barry Sonnenfeld signed on to direct the film in early 2010.[4]