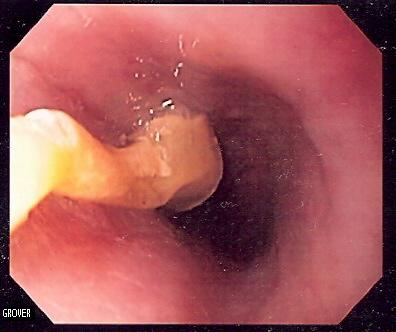 Many foods can lodge themselves in the , but the most common are meats such as , , or

Patients with esophageal food es are also at risk of complications, such as perforation of the esophagus, and aspiration into the lungs. As a result, urgent treatment of patients with high-risk features, or a lengthy duration of symptoms, is recommended.

Food bolus obstruction is most commonly caused by s, which are mucosal rings of unknown cause in the lower esophagus.

Other conditions that predispose to food bolus obstructions are s and peptic strictures.

The standard treatment of food bolus obstruction is the use of or fibre-optic cameras inserted by mouth into the esophagus.

Other tools may be used to remove food boluses. The Roth net is a mesh net that can be inserted through the endoscope, and opened and closed from the outside; it can be used to retrieve pieces of obstructed food. Snares, which are normally used to remove polyps can be used to macerate the food causing the obstruction. Dormia baskets, which are metal baskets used to remove stones from the in a procedure known as , can be opened and closed from the outside in a similar manner to macerate food and facilitate removal. used for biopsies can also be employed in a similar manner.

Historical treatment of food bolus obstruction included administration of enzymes (such as s), or even acidic substances, such as with the purpose of degrading the meat that was blocked; however, this was often complicated by perforation of the esophagus.