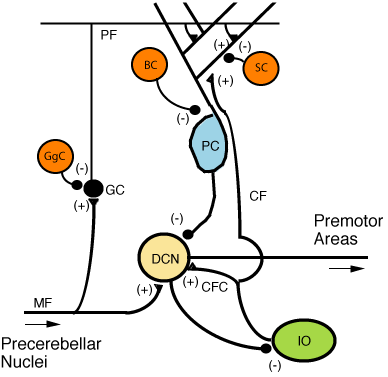 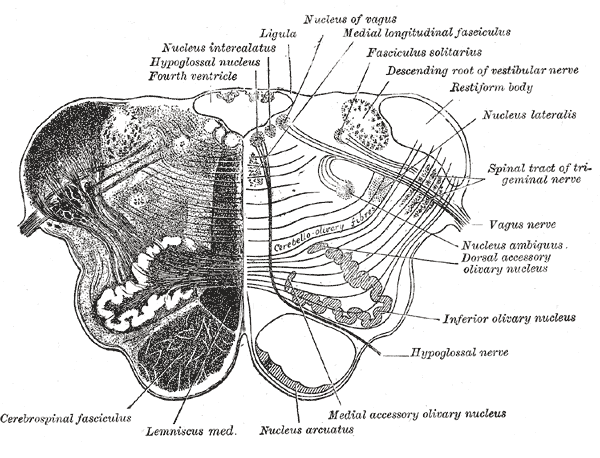 Caption2 = Transverse section of below the middle of the olive. (Inferior olivary nucleus labeled at center right.)
IsPartOf =
Components =
Artery =
Vein =
BrainInfoType = hier
BrainInfoNumber = 696
MeshName = Olivary+Nucleus
MeshNumber = A08.186.211.132.810.406.574
DorlandsPre =
DorlandsSuf =
The inferior olivary nucleus is the largest nucleus situated in the , part of the .

It is closely associated with the , but its specific function is not well known.

There is some evidence that it is stimulated by .

It consists of a gray folded lamina arranged in the form of an incomplete capsule, opening medially by an aperture called the .

Emerging from the hilum are numerous fibers that collectively constitute the peduncle of the olive. The axons, also known as , leave the olivary nucleus, exit through the hilum, and decussate with those from the opposite olive in the .

Then, as , they pass partly through and partly around the opposite olive and enter the inferior to be distributed to the cerebellar hemisphere of the opposite side from which they arise.

The fibers are smaller than the internal arcuate fibers connected with the .

Fibers passing in the opposite direction from the to the olivary nucleus are often described, but their existence is doubtful.

Much uncertainty exists also with regard to the connections of the olive and the .

Important connections between the cerebrum and the olive of the same side exist, but the exact pathway is unknown.

Many collaterals from the reticular formation and from the pyramids enter the inferior olivary nucleus.

Removal of one cerebellar hemisphere is followed by atrophy of the opposite olivary nucleus.

Hypertrophy has been associated with .