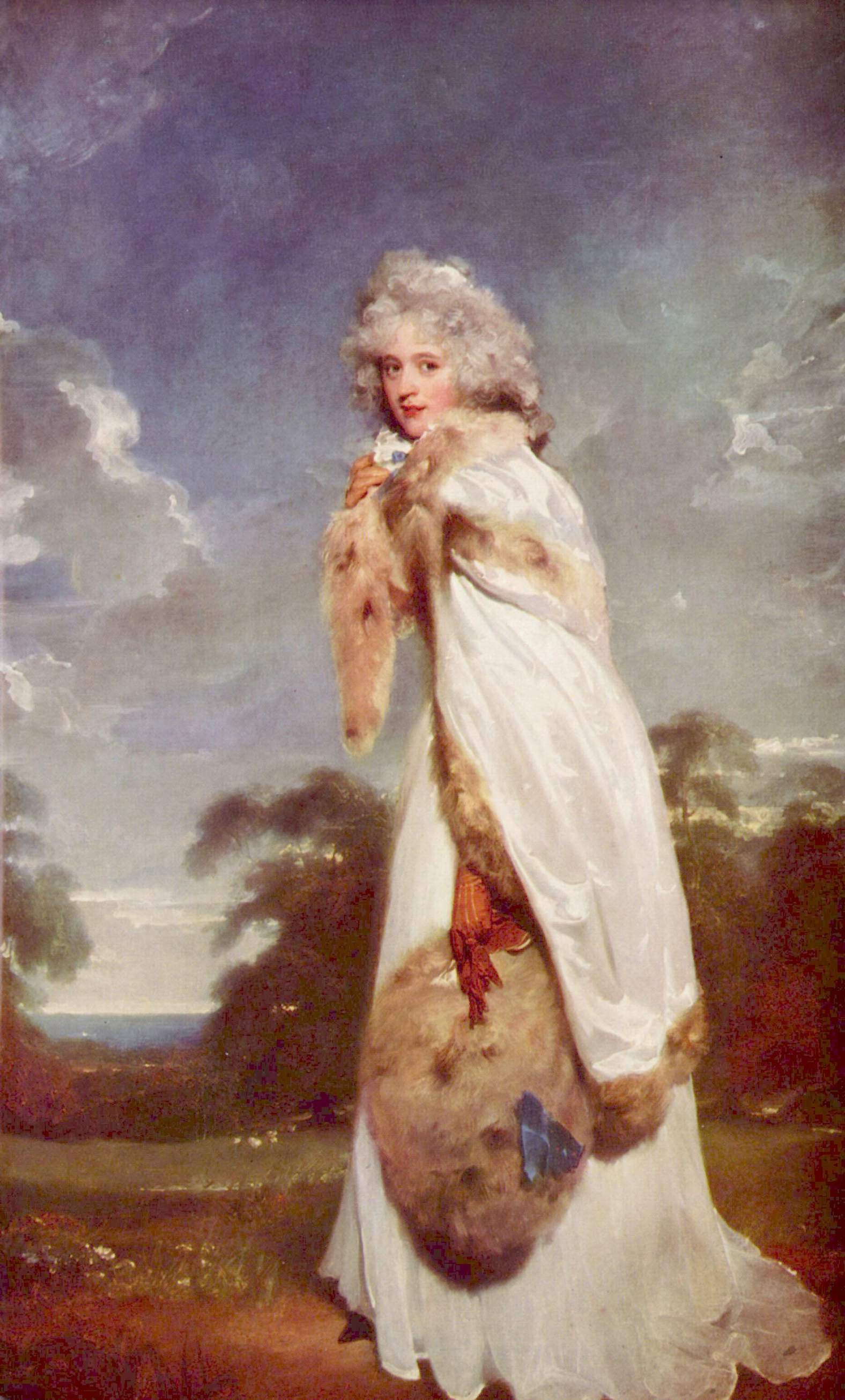 , depicted next to her future husband.] Elizabeth Farren (c. 1759&ndash; ) was an English of the late eighteenth century.

Elizabeth Farren was the daughter of George Farren of Cork, Ireland, formerly a surgeon and apothecary, then later an actor, and his wife (nee Wright) of Liverpool, Lancashire, the daughter of a publican or brewer.

At a very early age Elizabeth Farren, whose Christian name was sometimes shortened to Eliza, played at Bath and elsewhere in juvenile parts. In 1774 she was acting with her mother and sisters at Wakefield under Tate Wilkinson’s opponent, Whiteley. She played Columbine and sang between the acts of the previous tragedy ("Wandering Patentee", i. 201). When fifteen years of age she played at Liverpool Rosetta in ‘Love in a Village,’ and subsequently her great part of Lady Townly.

Her first appearance was in 1777 as Miss Hardcastle in "". Subsequent successes established her reputation and she became the natural successor to when the latter left in 1782. The parts of Hermione, Olivia, Portia and Juliet were in her repertory, but her Lady Betty Modish, Lady Townly, Lady Fanciful, Lady Teazle and similar parts were her favorites.

Introduced by Younger, her Liverpool manager, to Colman, she made her first appearance in London at the , 9 June 1777, as Miss Hardcastle. She was favourably received, and, after enacting Maria in Murphy’s ‘Citizen,’ Rosetta, and Miss Tittup in Garrick’s ‘Bon Ton,’ she was trusted by Colman, 30 Aug. 1777, with Rosina in the ‘Spanish Barber, or the Useless Precaution,’ his adaptation from Beaumarchais. She also spoke the epilogue to the play. On 11 July 1778 she was the original Nancy Lovel in Colman’s ‘Suicide.’ This was a ‘breeches’ part, to which her figure was unsuited, and she incurred some satire for shapelessness and forfeited the admiration of . Lady Townly in the ‘Provoke Husband’ and Lady Fanciful in the ‘Provoked Wife’ restored her to public favour.

On Sept. 1778, as Charlotte Rusport in the ‘West Indian,’ she made her first appearance at Drury Lane. At this theatre or at the Haymarket, with occasional migrations into the country and with some not very explicable performances, ordinarily for single nights, at Covent Gardens, she remained until her retirement from the stage. Hailed as a worth successor to Mrs. Abington, who left Drury Lane in 1782, she soon took the lead in fine ladies. Berinthia in Sheridan’s ‘Trip to Scarborough,’ Belinda in Murphy’s ‘All in the Wrong,’ Angelica in ‘Love for Love,’ Elvira in ‘Spanish Friar,’ Hermione in the ‘Winter’s Tale,’ Olivia in ‘Twelfth Night,’ Portia, Lydia Languish, Millamant, Statira, Juliet, and Lady Betty Modish are representative of over a hundred characters in which she was received with warmest favour. The parts she ‘created’ are not especially important. She was Lady Sash in the ‘Camp,’ assigned to Sheridan, Drury Lane, 15 Oct. 1778; Mrs Sullen in Colman’s ‘Separate Maintenance,’ Drury Lane, 31 Aug. 1779; Cecilia in Miss Lee’s ‘Chapter of Accidents,’ Haymarket, 5 Aug. 1780; Almeida in Pratt’s ‘Fair Circassian,’ 27 Nov. 1781; and enacted the heroines of various comedies and dramas of Mrs. Cowley, Mrs. Inchbald, General Burgoyne, , and of other writers. The last original part she played was the heroine of Holcroft’s ‘Force of Ridicule,’ 6 Dec. 1796, a piece which was damned the first night and remains unprinted. On her last appearance, 8 April 1797, she played Lady Teazle. Great interest attended her final performance, at the close of which Wroughton recited some not very brilliant lines of farewell. A large audience was attracted, and Miss Farren, after speaking the farewell lines of her part, burst into a passion of tears.

Farren had a figure slight, above the middle height, and suited to the disposition of drapery, in which she was happy; her face was expressive and animated, she had a blue eye and a winning smile, and a voice cultivated rather than sweet. In sentiment she was less happy than in vivacity, and the serious portions of the screen scene in the ‘School for Scandal’ were held inferior to the other portions of an impersonation that won the praises of the best judges.

A portrait of Miss Farren was in the Mathews collection in the c.1900.

In the many scandalous productions of her day, though much satire is expended on the origin of Miss Farren, no imputation is cast upon her fair fame. She had a short sentimental attachment to John Palmer and was admired and followed by Fox. Lord Derby treated her with much respect, introducing her to his female friends and obtaining her the patronage of the Duke of Richmond, at whose house in Whitehall she presided over a series of amateur performances. In distinction of manner and refinement of bearing she appears to have had no rival except Mrs. Abington, against who she was often pitted. Hazlitt speaks of ‘Miss Farren, with her fine-lady airs and graces, with that elegant turn of her head and motion of her fan and tripping of her tongue’ ("Criticisms and Dramatic Essays", 1851, p.49). Richard Cumberland ("Memoirs", ii. 236) mentions her style as ‘exquisite.’ ("Random Recollections", 1. 251) says of ‘the lovely and accomplished Miss Farren’ that ‘ no person ever more successfully performed the elegant leveties of Lady Townly.’ credits her with ‘infinite merit’ ("Wandering Patentee", iii. 42). Boaden ("Life of Siddons", ii. 318) says that after her retirement comedy degenerated into farce. Walpole spoke of her as the most perfect actress he had ever seen, and Mrs. Siddons, on the day of Miss Farren’s marriage, condescended the loss of ‘our comic muse.’

See the life-size portrait of her by in the , shown at the annual exhibition in 1790.

[Works cited; Memoirs of the Present Countess of Derby, late Miss Farren, by Petronius Arbiter, esq., London, 4to, n.d. (1797); The Testimony of Truth to the Exalted Merit, or a Biographical Sketch of the Countess of Derby, London, 4to, 1797 (a reply to the preceding); Genest’s Account of the English Stage; Monthly Mirror, April 1797; Thespian Dictionary; Tea-Table Talk, by Mrs. Mathews, 1857.] J.K.