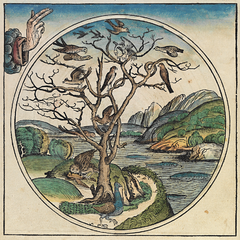 The Nuremberg Chronicle is an illustrated Biblical paraphrase and world history that follows the story of human history related in the Bible; it includes the histories of a number of important Western cities. Written in Latin by Hartmann Schedel, with a version in German translation by Georg Alt, it appeared in 1493. It is one of the best-documented early printed books - an incunabulum (printed, not hand-written) - and one of the first to successfully integrate illustrations and text.

Latin scholars refer to it as Liber Chronicarum (Book of Chronicles) as this phrase appears in the index introduction of the Latin edition. English speakers have long referred to it as the Nuremberg Chronicle after the city in which it was published. German speakers refer to it as Die Schedelsche Weltchronik (Schedel's World History) in honour of its author. 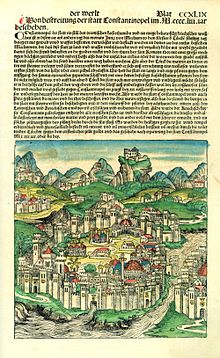 The illustrations in many copies were hand-coloured after printing.

The Chronicle is an illustrated world history, in which the contents are divided into seven ages:

The Chronicle was first published in Latin on 12 July 1493 in the city of Nuremberg. This was quickly followed by a German translation on 23 December 1493. An estimated 1400 to 1500 Latin and 700 to 1000 German copies were published. A document from 1509 records that 539 Latin versions and 60 German versions had not been sold. Approximately 400 Latin and 300 German copies survived into the twenty-first century.[1] The larger illustrations were also sold separately as prints, often hand-coloured in watercolour. Many copies of the book are also coloured, with varying degrees of skill; there were specialist shops for this. The colouring on some examples has been added much later, and some copies have been broken up for sale as decorative prints.

The publisher and printer was Anton Koberger, the godfather of Albrecht Dürer, who in the year of Dürer's birth in 1471 ceased goldsmithing to become a printer and publisher. He quickly became the most successful publisher in Germany, eventually owning 24 printing presses and having many offices in Germany and abroad, from Lyon to Budapest.[2] 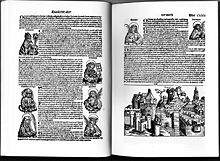 Catching a "lion fish" - a small illustration from a Latin copy. Note the red capital done in pen and ink, and the doodle in the margin below

The large workshop of Michael Wolgemut, then Nuremberg's leading artist in various media, provided the unprecedented 1,809 woodcut illustrations (before duplications are eliminated; see below). Sebastian Kammermeister and Sebald Schreyer financed the printing in a contract dated March 16, 1492, although preparations had been well under way for several years. Wolgemut and his stepson Wilhelm Pleydenwurff were first commissioned to provide the illustrations in 1487-88, and a further contract of December 29, 1491, commissioned manuscript layouts of the text and illustrations.

Albrecht Dürer was an apprentice with Wolgemut from 1486 to 1489, so may well have participated in designing some of the illustrations for the specialist craftsmen (called "formschneider"s) who cut the blocks, onto which the design had been drawn, or a drawing glued. From 1490 to 1494 Dürer was travelling. A drawing by Wolgemut for the elaborate frontispiece, dated 1490, is in the British Museum.

The book did not have a title page, common at that time. As with other books of the period, many of the woodcuts, showing towns, battles or kings were used more than once in the book, with the text labels merely changed; one count of the number of original woodcuts is 645. The book is large, with a double-page woodcut measuring about 342 x 500mm.[2] Only the city of Nuremberg is given a double page illustration with no text. The illustration for the city of Venice is adapted from a much larger woodcut of 1486 by Erhard Reuwich in the first illustrated printed travel book, the Sanctae Perigrinationes of 1486. This and other sources were used where possible; where no information was available a number of stock images were used, and reused up to eleven times. The view of Florence was adapted from an engraving by Francesco Rosselli.[3]