Dukinfield Junction (grid reference SJ933984) is the name of the canal junction where the Peak Forest Canal terminates and meets the Ashton Canal near Ashton-under-Lyne, Greater Manchester, England. The area has been designated by Tameside Metropolitan Borough Council as a conservation area.[1] 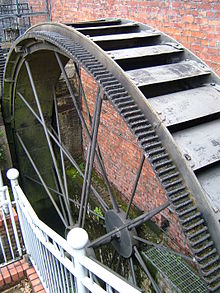 The Ashton Canal Warehouse was built at the Portland Basin in 1834 by the canal company replacing the early warehouse to the east. It is a three storey warehouse 61 metres (200 ft) by 22 metres (72 ft), brick built in English garden wall bond. The wooden floors are supported by cast iron columns. The southern elevation which opened to the canal was 3 storeys high and it had three shipping holes. The northern elevation which opens to the road is two storeys high, trap doors allowed split loading and unloading between the road and the 3 canal arms. The roof was flat allowing increased storage. The internal hoist system was powereed by an external waterwheel. The head race was taken from the canal, and the tailrace fed down to the River Tame 10m below. The breastshot waterwheel was constructed in 1841 to a suspension design introduced by Thomas Hewes and William Fairburn had rim gearing. It cost ₤1078. It was 24 feet (7.3 m) in diameter and 3 feet (0.91 m) in width and produced 15 hp. Power was transmitted by a line shaft[2]. The building we see today is the result of a 1998 restoration.[3]. 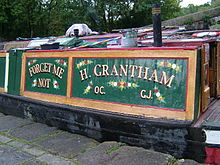 The Portland Basin hosts the Wooden Canal Boat Society which has restored and works six traditional narrowboats. They are a registered charity.