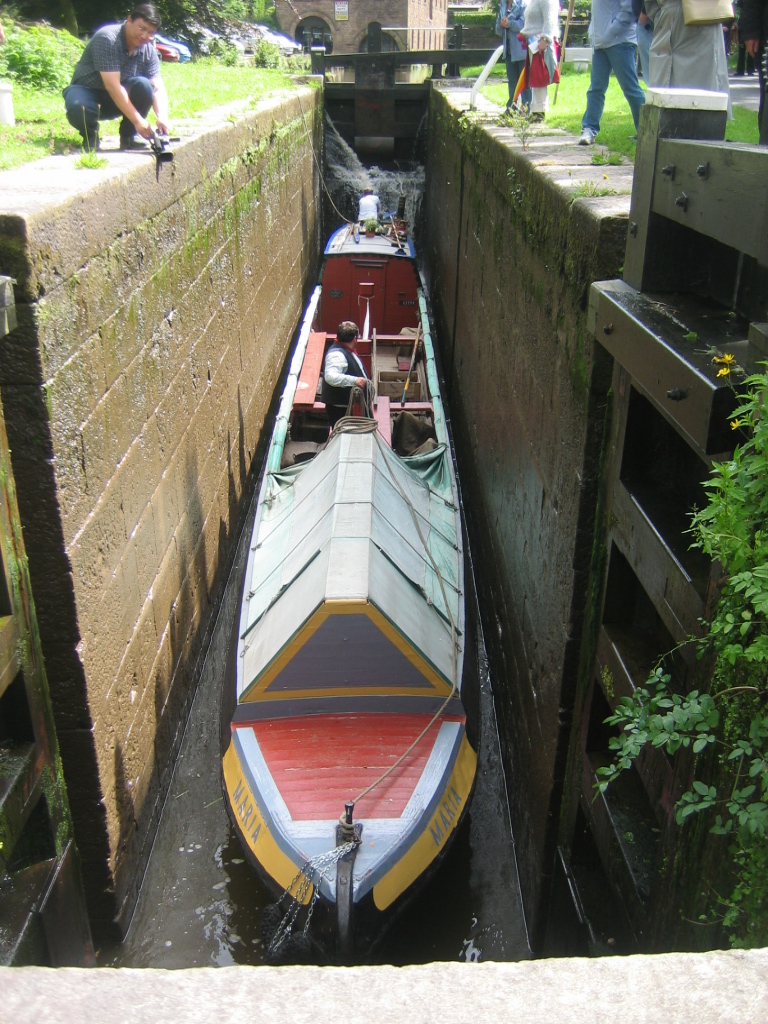 The lower Peak Forest Canal runs from in , its junction with the at the southern end of the Tame Aqueduct at (gbmapping|SJ934984) through Newton, Hyde, Woodley, , , to connect with the at Marple junction.

The upper Peak Forest Canal continues from Marple through , , , and to terminate at , gbmapping|SK021820) - (the village itself was renamed in Victorian times). Recently, the extensive basin has been reopened, and is now a popular venue for visiting boats. There is also a short branch from Bridgemont to the centre of . Whaley Bridge was once the site of a connection to the , which ran across the Peak District and joined up with the . The lower canal is part of the waterway.

The "lower" Peak Forest heads south from Ashton to Marple on a single level. It crosses the River Goyt on , alongside a railway viaduct, and then rises through 16 locks in a pretty setting through the centre of Marple. Above "Top Lock" the canal is joined at by the and continues ("upper" Peak Forest) on the same level - half way up the valley-side with beautiful views of Furness Vale, and the Peak District beyond - all the way to the terminus. This level is the same as that of the upper Macclesfield canal, so boats can cruise from Whaley Bridge or Bugsworth all the way to the top lock at Bosley without having to use a lock.

It was authorised by Act of Parliament in 1794 and its purpose was to provide an outlet for the vast limestone deposits around . As is over convert|1000|ft|m above sea level, the canal was terminated in a basin at Bugsworth, in and the line was continued up to the quarries by means of a gravity operated feeder tramway, known as the , which was six miles (10 km) long.

The construction of the canal and tramway was promoted by (the largest shareholder) [Harvnb|Parkinson-Bailey|2000|p=17.] with much of the finance being provided by of , . The line was surveyed by Thomas Brown and the consulting engineer and resident engineer were and Thomas Brown, respectively.

Work was begun first on the section between Ashton and Hyde Hall, where new coal-pits were being opened, so as to derive some income as soon as possible. Outram was somewhat delayed by a request from the committee to report on ideas by who had been awarded the contract for the cuttings at Werneth. These would have replaced the stone construction of Marple Aqueduct by a somewhat flimsy cast iron trough. Outram, who was experiencing problems with the Holmes Aqueduct on the was well aware of potential weaknesses. Fulton had also suggested the use of small tub boats rather than conventional narrow boats, and an inclined plane at Marple instead of locks. Outram having privately voiced his disquiet, Fulton's plans were quietly dropped.

At the same time as Outram was working on the lower end, he came under pressure to make progress on the section Bugsworth to Marple, and Samuel Odknow's coal-pits and lime kilns. Splitting the work in this way possibly contributed to the £1100 overspend recorded in 1795, though there were problems getting the shareholders to meet their commitments. By 1796 this had risen to £4000, but in August the tramway and the canal opened to Marple.

Nevertheless at the end of 1796, funds from investors were still insufficient to finish the locks and the aqueduct at Marple and Outram was asked to suggest a temporary alternative. He produced two solutions, one to cross the arches of the aqueduct, the other assuming that the arches were unfinished. It was decided not to interfere with the ongoing construction of the aqueduct, so the railway ran from its Marple end to the proposed top lock. The arches of the aqueduct were completed in November 1798 - and the workers were given a "handsome treat" in celebration - being finally completed towards the end of 1799.

However, there was still a great of work to be done at the lower end - the driving of Hyde Bank Tunnel proving a particular problem - and the railway and aqueduct saw little use until the canal finally opened along its full length in 1800.

The upper level of the canal and tramway opened for trade on the and soon became a bustling interchange between the tramway and canal.

Brown and Outram's efforts were much assisted by the appointment of Gernan Wheatcroft to manage the canal at Bugsworth and Whaley Bridge. He proved so efficient that he was able to use the threat of resignation to gain the addition of £30 to his £75 a year salary to keep and maintain a horse to assist him in his duties. In a move that would not disgrace a modern marketing organisation, the quarry owners retained Outram's future father-in-law, Dr. James Anderson, the Scottish agricultural expert, to write a treatise on the benefits of lime in farming, which they published.

Trade increased rapidly and it was becoming necessary to double the railways. Attracting suitable labour was also a problem. Cottages were rented to convert into dormitories, and Wheatcroft opened a shop where goods could be purchased cheaply. At one point, the employers offered "a good flannel waistcoat and trousers" for each worker, plus a jug of ale each day.

The Marple railway was still a serious bottleneck. The canal company still had not the funds to complete the Marple locks - and the reservoir at Combs that would be necessary. A petition to Parliament was considered but, finally, £24,000 was borrowed from Oldnow and Arkwright and the work was completed in 1805.

At Bugsworth, limestone brought down the tramway was either put into boats to be taken to and beyond or it was put into lime kilns to be burnt to produce quick lime. The trade in limestone and quick lime (also known as burnt lime), as well as the transport of coal into the basin for firing the kilns, accounted for the greatest proportion of the Canal Company's income.

With the coming of the railways, the canal began to lose its business and in the 1920s the Peak Forest Tramway and Bugsworth Basin closed. Later, the lower level of the canal and Marple locks fell into disuse, to the extent that by the early 1960s, the lower part of the canal was impassible.

In the late 1960s and early 1970s, the Peak Forest Canal Society, and campaigned for the restoration of the Peak Forest and Ashton Canals and they reopened on 1974. The Lower Peak Forest Canal, from Dukinfield Junction to Marple, was one of seven stretches of canal, formally designated as remainder waterways, which were re-classified by the British Waterways Act of 8 February 1983. Under the act, a total of 82 route miles (132km) were upgraded to Cruising Waterway Standard. [Lewis A. Edwards, (1985), "Inland Waterways of Great Britain", 6th Ed, Imray Laurie Norie & Wilson, ISBN 0-85288-081-2]

Bugsworth Basin remained derelict for much longer, and was finally re-opened to navigation on 2003.