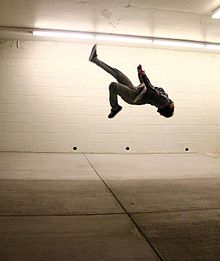 Tricking (short for martial arts tricking) is the informal name of a type of physical activity derived from the martial arts that includes techniques found in gymnastics, B-boying, and similar disciplines. Examples of incorporated techniques include the 540 kick from Taekwondo, the butterfly twist from Wushu, and the double leg from Capoeira. The sport aims to create an "aesthetic blend of flips, kicks, and twists."[1] Tricking differs from similar arts in that expression and exploration are more heavily favored. An individual who practices tricking is typically referred to as a "trickster" or "tricker".

A tendency to exhibit techniques that are more flashy and complex was observed in martial arts during the period following the 1960s, predating the current "tricking" movement. Especially in taekwondo, an increasing emphasis on spectacular spinning, jumping or flying kicks developed during the mid-1960s with the introduction of international competitions.[2]

"Tricking" proper is an internet phenomenon, emerging in the early 2000s. By late 2003, the online tricking community was well-developed, bringing trickers from across the globe together. With the rise of YouTube, trickers were able to share their videos with others and the world of tricking experienced a massive rise in popularity and interest.[citation needed] Also Youtube has shown young trickers new tricks and broken the tricks down for them. Since the beginning of 2008, tricking has been receiving much wider publicity and popularity among non-tricking circles due to efforts of popular tricking teams like Loopkicks, Team FS, Unito, Disastrickz, Flipmonk Sqaud, Furious Force, New Age Ninjas (NAN) and Rain City Tricking of Olympia, Washington.[citation needed]

A tricker demonstrates a characteristic tricking move, a Cheat 720 Twist.

Unlike many established sports, tricking has no formal rules or regulations, and there are no governing bodies that regulate the sport. Strictly speaking, participants are free to perform any kind of dramatic maneuver and call it a 'trick' - though there are certain moves which are generally accepted as tricking moves. Some tricksters (especially those who discover tricking through the Internet) tend to learn the easier moves first (such as the 540 Kick, Aerial, Kip-Up, and Backflip) and try to progress through a list of recognized tricks in the perceived order of difficulty. However, how difficult a trick is will vary from person to person; certain tricks may be inexplicably easier or harder than normal for a particular trickster to learn.

Tricksters can be divided into different categories of style: some prefer performing mainly martial arts tricks (which almost always incorporate kicks into a trick), others mostly freestyle gymnastics and flips (mainly focus on doing multiple rotations and combining different types of rotations), but most tricksters mix a combination of all the disciplines. Tricksters must train their bodies hard to be able to consistently perform their tricks at any time.

Due to tricking's relatively underground status, specialized training and coaching for the activity is almost non-existent. Some practitioners come from various martial arts and gymnastics backgrounds, however the majority of tricksters are self-taught. In addition to martial arts and gymnastics foundations, tricksters usually learn from friends or other individuals who have more experience than themselves. Many tricksters, who do not have access to an environment with which to learn, train by simply reproducing movements seen in videos. A rising practice within the tricking community has been to form "teams" among friends. These groups serve not only as a form of self-encouragement for individuals, but also to build self-identity and credibility as a trickster in the community. Similarly, trainees seek aid from tricking camps and gatherings which expose tricksters to other individuals with higher levels of skill.

Practitioners usually perform the majority of their tricks on grass or plyometric flooring. Foam landing mats, trampolines or jumping jamporees are utilized to become familiar with new movements in a safe environment. In addition to practicing the movements of tricking, many tricksters improve physical fitness to compliment their training. A mutually common skill among many tricksters is body conditioning and weight training, as many of the movements within the activity require a high level of strength. Dynamic and static flexibility training is also commonly practiced by tricksters due to the high range of motion many tricks require.

Since its inception, gatherings have been a regular part of the tricking community. Organized by tricksters, usually with the assistance of online forums, gatherings are an opportunity for individual tricksters to showcase their styles and seek advice from other tricksters. Gatherings usually have one or more Gym Sessions, where a gymnastics center is rented out especially for the gathering. In addition, there are also mini-gatherings(also known as seminars/sessions). Compared to regular gatherings where trickers from all over the world attend, mini-gatherings generally attract local trickers to a one day session. Which in turn allows local trickers to meet, trick together, and strengthen tricking in their own communities.

Trickers do not only make teams and practice together, but often perform together as well. Many teams choreograph demos which they perform at events. Not only do the demo's promote their teams, they also bring tricking out into the light for the rest of the world. Some trickers choose to pair up with other trickers at competitions and perform – for example, Steve Terada and Rudy Reynon competed together in a (musical) open form.