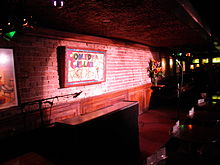 The Comedy Cellar stage as seen from the audience left

The Comedy Cellar is a comedy club in Manhattan, where many top New York comedians perform. It was founded in 1982 by then standup comedian, and current television writer/producer Bill Grundfest. It is located in the heart of Greenwich Village on 117 Macdougal Street between West 3rd Street and Minetta Lane.

The Comedy Cellar, like The Comedy Store, uses a showcase format, as opposed to a headline format like most clubs. A show will consist of between five and seven comics performing sets of roughly 20 minutes each.

Each week consists of two shows a night on Sunday through Thursday, three shows each Friday, and four shows on Saturday. The Cellar is located under and connected to the Olive Tree Cafe, where many of the comedians hang out after performing.

Much of Jerry Seinfeld's 2002 documentary Comedian was filmed at the club, and it also can be seen in a 2006 Pepsi commercial starring SNL star Jimmy Fallon.