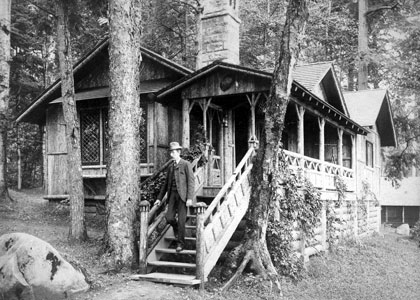 Camp Pine Knot, also known as Huntington Memorial Camp, on in the of State, was built by . Begun in 1877, it was the first of the "Adirondack " and epitomizes the "Great Camp" architectural style. Elements of that style include log and native stonework construction, decorative rustic items of branches and twigs, and layout as a compound of separated structures. It is located on the southwest tip of Long Point, a two mile long point extending into Raquette Lake, in the Town of Long Lake in .

The camp consists of some two dozen buildings, including a seven-room "Swiss Cottage", four "Log Cottages" of one to three rooms, two frame cottages of three and five rooms, a "Glass Dining Room", and a five-stall horse barn and wagon shed. Covered walkways connect many of the buildings. There was also the "Barque", a 20 by 60 foot four-room bark cabin built on a log raft, used to escape from the dreaded in the spring; it was fully equipped, with a kitchen, bath, and running water.

Pine Knot was started by Durant's father, railroad developer , as a showplace to draw investors to Durant's holdings, but it was William West Durant that would develop it into the remarkable model for Adirondack Great Camps to follow. In 1890 West sold the camp to wealthy industrialist, .

The camp went unused from the start of the 20th century until 1949, when it was given to the , as their Outdoor Education center. Due to the soundness of its construction, despite its long disuse, the buildings required little repair. The "Barque" is being rebuilt.

The camp was included in a multiple property submission for listing on the in 1986,